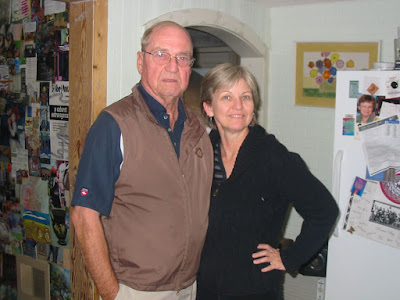 Naturally the weather cooled off when he flew in from Kelowna— that was to be expected— but it came as a shock to have the mercury drop into the minus-thirties just as Dad was getting ready to leave. I know he will be glad to get the hell out of here tomorrow when his flight leaves Saskatoon.

He spent the week at Karen's— she at least has a decent bed to offer to guests and frankly I'd rather eat her cooking than my own— and got in as much visiting in the area as he could. There were a lot more old friends he'd like to have seen but only so much time and energy; even I, Number One Child, felt fortunate to get to see him three times while he was here. Dad and I are both of the "said all there is to say in the first half-hour" camp and, while I can sit longer than he can, I didn't have to since two of the visits were in my kitchen and I could keep a little bit busy while making conversation. Dad's ass suffered on the wooden kitchen chairs. Can't wait to get moved over here to the comfy padded swivel chairs with arm rests; then a person might be able to sit and chat in comfort.

Scott's got the bathtub drained and everything in working order once again. Though I've told him he's insulted the resident ghost because inexplicable annoyances keep popping up for him to deal with. One day he'd made the morning coffee and we'd been here some hours afterward, and then I left for a while and came back to discover the 10-litre plastic jug, nearly full and thus heavy with drinking water, had somehow tipped onto its side and leaked through the loose lid, leaving a large puddle of water on the kitchen floor. How could that have happened? Scott is not the kind of person who leaves lids loose or full water-jugs precariously balanced; I'm the kind of person who does that sort of thing, but I hadn't been near the water jug that day.

He better make friends with that ghost, that's all I'm saying.
Posted by Blondi Blathers at 2:13 PM 3 comments: