Solving the Problems of the World

"They want to take away their pensions," he says, talking about the looming Canada Post lockout. "What bugs me is they've just given themselves huge pension raises."

It's not yet 6:30 in the morning and I've just opened my ears to hear Uncle Carl moseying back to bed after a trip to the bathroom. I get up and do the same, then close the bedroom door on these two — Scott and Aunt Reta — who have the wherewithal to discuss the problems of the world first thing in the morning when I can barely squeeze out a civil word. (My nimble fingers work, though, don't they!)

I decided to get to the office earlier than usual so I can be home earlier, since I have to pick up groceries and think about supper at a proper time, what with guests in the house. I've had coffee, washed last night's plates and cups, and made a pot of oatmeal. One more cup of coffee and I should be good to go. Just gotta brush my teeth.

And they are still talking. 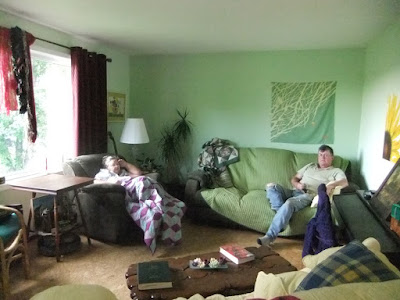 
Maggie Turner has left a new comment on your post "Stormin' Stormin' Stormin'":
I like storms, but there is a point where I cease to enjoy them, when they hit the line between spectacular and the wrath of nature. I envy that you can see them coming from such a distance! My view is such that they are pretty much on top of me before I know they are there.

We've had some pretty scary clouds lately, and a lot of wind. Might be a new Tornado Alley up here.


Below, click on "Comments" to see reader responses to today's entry.
Posted by Blondi Blathers at 7:45 AM 1 comment: