It still seems plenty cold out there, but the kittens were sunning themselves this morning so it can't be so bad: 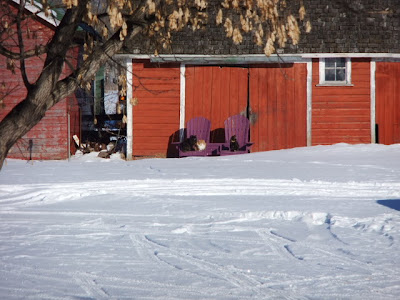 My uncle Neil is coming to pick up Emil and me to spend the afternoon at his place. Two of my cousins are going to be there with their kids, and I haven't licensed my minivan since the plates ran out last month. Thought I could get away without it for a while, considering Scott has two vehicles; however, his work truck has broken down and the other one is never available, so it looks like I'll be off to the Saskatchewan Government Insurance office one of these days to lay down my cash.

It's not that I've felt stranded; I don't often go anywhere other than my weekly run to town for groceries, laundry, and Emil, and I'm just as happy to stay home, to be honest. Nevertheless, in spite of letting the laundry pile up so I didn't need to take it in, I've relied on Scott to stop at the store when he's near it, and to bring Emil out on Fridays and take him back on Sundays for the past month, and this cannot continue.

In other news, my cousin Oscar has had his final c.t. scan after the past year of interfuron followup treatment after his surgery for melanoma, and the chemo and radiation he endured, and he is cancer free. Yippee!!!! He and his family have been through a year from hell. Even so, he is one of the lucky ones.
Posted by Blondi Blathers at 12:37 PM 2 comments: