I became acquainted with Pete when I read something he'd written (I think), which included the fact that he lived in a tipi. As I was quite interested in acquiring a tipi of my own at the time, I probably introduced myself via letter. He lived up in Canada's far north and we corresponded for a while; handwritten letters more than 20 years ago. His pages completely in fully capitalized letters. One thing I remember writing about was archetypes in the human experience. We were both readers. The frequency of letters dwindled to nothing after he fell in love and got married, and I didn't think about Pete again except when I saw the photograph he'd sent of his tipi. I included the picture on my wall collage when years later I finally tacked up my entire collection of images on paper.

And then some time after I began discovering many old friends on Facebook, I looked Pete up, and there he was! So we have reconnected. He is a frequent FB poster so it's a way to get to know him a little; at least, his interests. I know he is big into race horses and sled dogs and rustic cabins. And here's what he knows about me:

Or what made him think of of me. Anyway by posting the above image on my FB wall, he turned me onto Agnes Laczo. I spent a goodly amount of time scrolling through her webpage, looking at her paintings and artwork, and much of it Makes. Me. Happy because it is simply just plain delightful. What can I say.

So ... talk about making your short story long ... I purchased something from Agnes and this week it arrived in the mail from Budapest, Hungary: 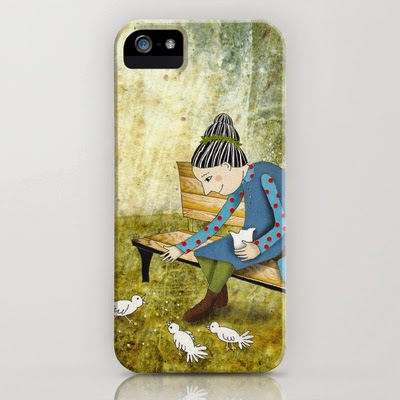 That's the one I picked, but there are a whole bunch and they're lovely: CLICK HERE.