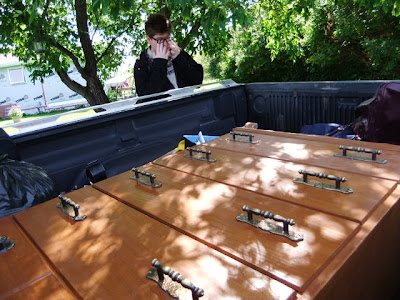 All Emil's worldly goods were loaded up yesterday for his move into a group home in town. 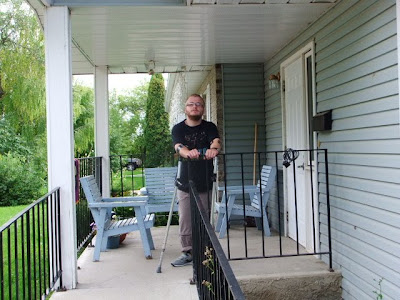 He seemed thrilled to finally be there to stay. Here he bids us adieu from the front step.

On Sunday we drove to Kelvington to visit Grandma. On the way we surprised a coyote pup playing on the road. It started, seemed to be about to play with us, then thought better of it and ran into the ditch and peered out through the long grass. By the time I got the camera ready, it had taken off.

In recent months Grandma's taken to lying on her bed a lot, and saying nothing unless she is addressed directly. I swear this time I heard her snore at least twice. Sleeping with her eyes open?
At the end of her hallway these alpacas were trying to see in the windows: 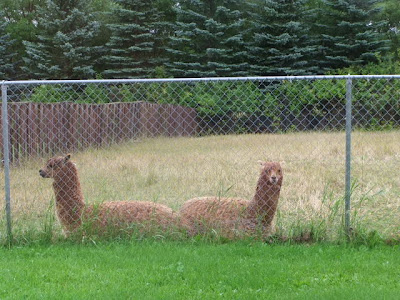 After leaving the lodge we discovered a flat tire. Fortunately the CAA man hadn't put his ribs on the barbecue yet, so he answered our call within a half hour. I had been considering letting my roadside assistance membership lapse, but now I'm thinking -- who else could I have called that would have dropped everything to change my tire in the mud?
I'm glad he was at my service, anyway. He damn near died getting the bolts off; I wouldn't have been able to do it. 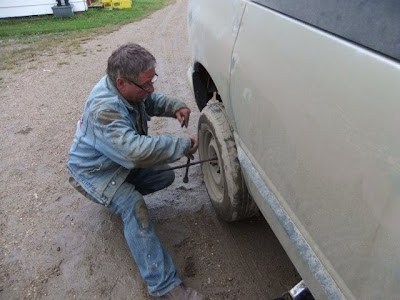 I went for a walk with the dogs last night. Wondered why the two old girls were slower than usual; forgot I'd doped them up earlier because it was thundering. We've had more rain. Neverending rain. I haven't had to water my flower garden once this year. Just the pots, and even those not often.
The leaves have begun to turn and drop, overnight.
These are the cattle keeping the pasture around our house shorn. Who says cows aren't pretty? Look at the light-coloured one and tell me that isn't a pretty face: 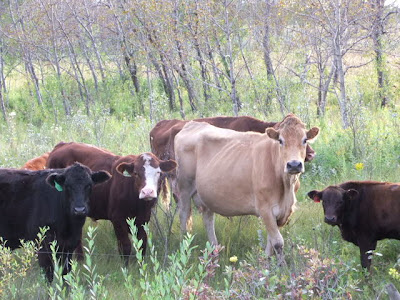 I make Everett take me for a drive every day. He needs to practise if he hopes to get his licence. Apparently he couldn't care less, but I do.
This hawk was particularly bold, flying up off the road and watching us from a tree nearby. When we got home, Scott described the unusual behaviour of a hawk in the same location, so I guess we all saw him. Our guess is that he's a ferruginous hawk; at least, that's the closest thing to him in our bird book. 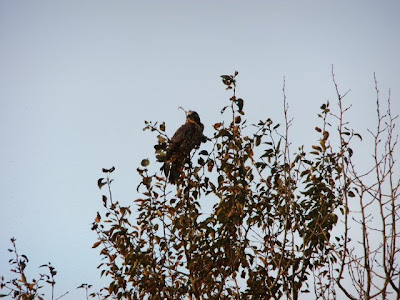