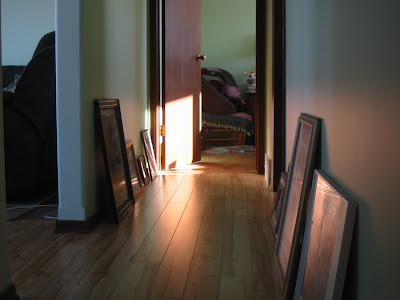 Where will all the pictures go?

Mon 10:38pm
Scott arrived around 9 this morning for coffee and I broke the news: the sewer had backed up last night while we were out. Was he thrilled? Oh, certainly. Did he curse and swear? Nope. Must be on best behaviour or something.
He must have been a very bad boy in another life, because he's getting no breaks in this one.
So I roused Emil out of bed (one last day home from school, to finish blowing his nose) and took him over to the old house, where water could be used. And while poor old Scott cancelled his plans to work in town and came over here instead to spend his day shovelling snow, augering a hole through the ice on the lagoon, and getting the drainage system working again, I took ye olde minivan to town for an oil change, visited my old friend Bev Semko at her mom's (her dad's funeral is Thursday), and then went and bought $265 worth of groceries and came home just in time to make a quick but delicious—if I say so myself—supper. If you like pasta, spinach, tomatoes and feta cheese, that is—Popeye Pasta is the name of the recipe I followed—as opposed to meat and potatoes. Scott goes into withdrawal if he doesn't eat potatoes at least once a day and sometimes more. So he's often in that condition, when I'm the cook.
After all that, he had the waterworks shipshape once more and Everett did dishes while I spent the entire evening here in my office, catching up on the four hours of work I missed today. That four hours flies by, though, when I get my teeth into something.
It's 20 below and snowing, and that's the scintillating news from Saskatchewan.

An entry on Alex Waterhouse-Hayward’s webpage, which I recommend to you, includes the following poem written by his estranged aunt, now in her nineties; a gorgeous photo of WH's aunt; his memory of her and their estrangement. Just click here. Be prepared to lose an hour poking around his webpage. I'm telling you.

Evening At Home
(with bitterness)

There you are
Sitting before me,
Relaxed…sprawling, almost,
Your newspaper making little
Hackneyed rustlings.
And I am here
In the red armchair,
Hands loose in my lap,
Doing nothing.
Dreaming.

Not a word has joined us
For half an hour.
The silence is not expectant,
Not comfortable-
A dull, slate colored silence.

I ask myself, wonderingly:
“How can you miss someone
Who is right before you?”
Because I miss you,
I am unspeakably lonely
Even as I gaze upon you.
(You turn a page…there is a
Crackling.
You light another cigarette.
And I reach for a magazine
Three months old.)