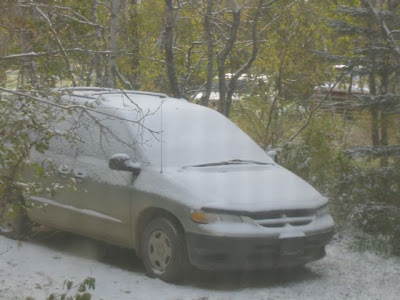 Yes indeedy, that's snow you're looking at, still there at 1 p.m.

It's probably not here to stay, but it might as well, it's been cold enough for the past week. Alas, the farmers don't all have their crops off so we hope the snow melts and things dry up enough to complete the local harvest.

The temperature had plummeted by yesterday morning. After school Everett went to the barn to feed and cuddle the cats, and discovered two tiny kittens unmoving, two of their siblings missing, and a dead one being eaten by its mother. He gathered the survivors into his arms and brought them into the house. "Mom, I need your help!" he called from the porch. For a frightening moment I thought his arm had been accidentally amputated or something.

Every year we rescue kittens from certain death, though this pair is older than the very young ones Everett usually finds abandoned, starving, and freezing. These two are from Cuddles' second litter this summer; the first batch, beautiful healthy kittens that I showed pictures of in the spring, was also killed and eaten. We don't know how they were killed, but they had bite marks on their necks and their mother was found eating their bodies.

An online search for an answer to what is happening suggests that moving their nest can stress the mother enough to cannibalize her offspring; this is exactly what may have happened the last time as well as this time, when well-meaning children thought they'd put the kittens in a warmer or safer place than their mother had chosen for them. Granted, she's not the best mother in the cat world, sweet as she is, though it was obvious that she loved those kittens. She was purringly blissed out when they nursed, and after they were killed she very obviously mourned them for days. Your heart practically broke for her.

No one actually saw Cuddles kill them, so it's possible they were killed by a tomcat or one of the other mother cats here on the farm and that Cuddles was just cleaning up the carcass in order not to attract other predators to the living kittens, or to recoup some of the nutritional investment she'd already put into her babies. However, this doesn't seem to happen to the litters of the other mothers, so it's a bit suspicious.

We managed to get the kittens on their way to warming up; they were so cold they wouldn't drink and we had to give them droppersful of warm milk. Everett's heading off with Gord for the weekend so Alexander, from next door, has taken them to his house and is looking after them there. Can't say as I mind one bit.

Last week a tech guy came out and hooked up wireless cable at GGFarm. Now my computer needs to be moved over there. I hope to get that done this weekend. Below is one of the last photos you'll see of me hard at work in the office here at the old place. 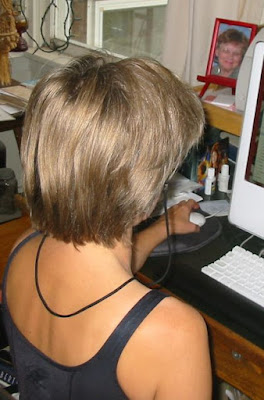