The Coming of Chloe 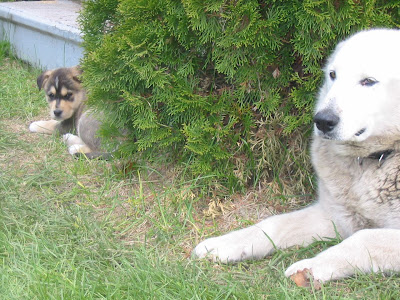 This is as close as the puppy can get to Casper, so far.

Well, it's her own fault. When we arrived at the farm she herself growled at the big dog first.

She's no dummy, but she is younger than I realized because she has been mournfully crying a little.

Karen said that when she and her siblings were picked up, the little girl who lived at their birthplace had names for them all, and this one was Chloe. That seemed a silly name for a dog, but already I find it suits her.
Posted by Blondi Blathers at 4:27 PM 2 comments: