That title is a bit extreme for what I'm about to tell you.
However.
Just these two things that Bev passed along.

The first came from her former spousal equivalent, who worked for SaskPower.
When your electricity has flickered off and on three times, don't wait for it to flicker off and stay off. It's going to.
Prepare for a lengthy outage.

And two — this one came from her friend who is a florist —
Never mind those little powdery packs of plant food that come with your bouquet of cut flowers. They are good for nothing, Bev was told.
Instead, put the stems of your flowers into a vase of HOT water. 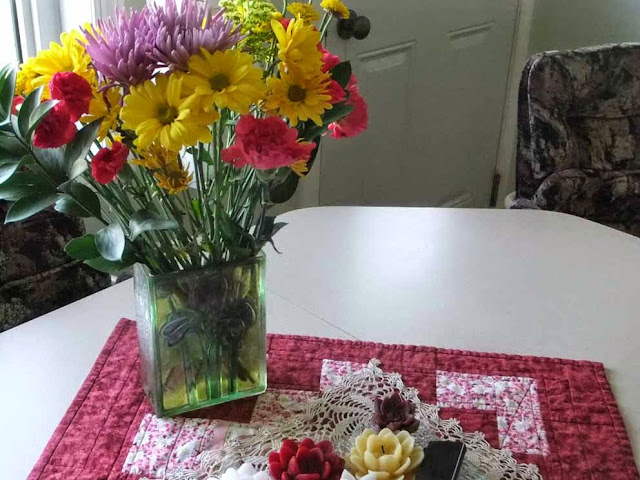 Against my better judgment, but since I am not a florist so why would I know better? I did that with this bouquet purchased last weekend. (I imagined the flowers screaming in agony.)
Are they lasting longer? It's hard to say, isn't it, because there's no way of knowing how long they'd've lasted if I'd done it the other way.

When flowers come without the powder packs or if I've picked them from my own flowerbeds, I usually add a bit of honey or maple syrup or even molasses — whatever's on hand — to the lukewarm water.
Does it make any difference? You tell me.

I had a chuckle Friday morning when the provincial CBC radio morning show aired a piece about a claim made by a connect-with-an-extramarital-lover website. Apparently the site gets its highest number of new signups the day after Mother's Day. The spike in numbers is attributed to disgruntled women who haven't felt their maternal contributions to family life have been adequately appreciated by their husbands the day before and it has prompted them to start looking around for other relationship options.

Of course, as a guest on the show pointed out, it's unlikely that there was a perfectly happy marriage before Hubby forgot to bring home flowers on Mother's Day or take his wife out for supper or express his gratitude for her often thankless part in bearing and raising their children.

Still, smart husbands might take note that a little acknowledgment goes a long way with wives.

Posted by Blondi Blathers at 7:00 AM 8 comments: