Yes, indeedy!
We had a visit with Scott's cousin Alex (in England) via Skype ("Skype-ee," as he calls it) yesterday, and he told me in no uncertain terms: "That thing you've got on your blog now is SHITE!"
Well! I never!
Which was just the kick in the pants I needed to do something about it instead of just threatening to.
So there's a quick change, Alex, just for you.
Still no time to deal with it properly, as I've gotta be out the door in about half an hour.
Off to Saskatoon for a root canal. Yay! I have the most fun life, ever.
And this is how things look from our front window this morning:


Fortunately my driver is a travelling pro, and won't be the least fazed by this weather. It takes more than a little snow to keep a Saskatchewan girl off the roads anyway.

Yesterday the snow was almost gone: 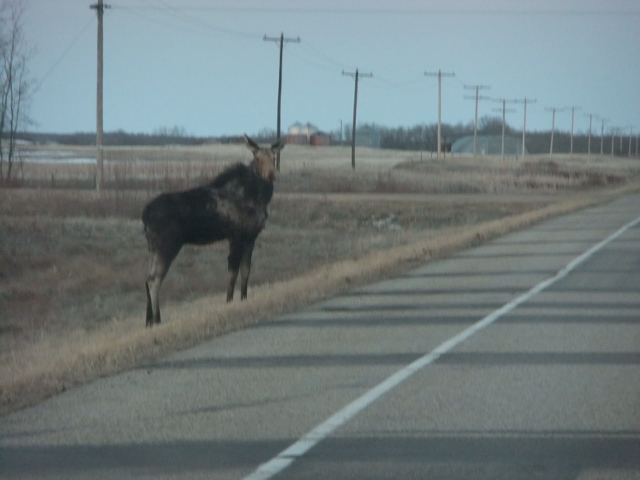 Saw this last evening on our way to take some food to the home of a friend who lost her husband— only in his forties — late last week due, I believe, to complications from a new medication. (What can I say about that? It is a horrible shocking thing, and a lot of people are hurting, and it makes you put your hand to your heart and think that sometimes life is nothing but a great big mean betrayer.)

The moose seemed confused and trotted toward us on the highway, then turned and went another way, then came back again, several times. We were told later that the white patch is not from ticks, as we'd thought. Tick infestations happen later in the season. Right now it's normal for moose to be losing their winter fur.

Sigh. And I have to get out the door. Don't wanna! But watch me go from housecoat to bluejeans and wet hair in 10 minutes. Bye for now.
Posted by Blondi Blathers at 8:24 AM 4 comments: