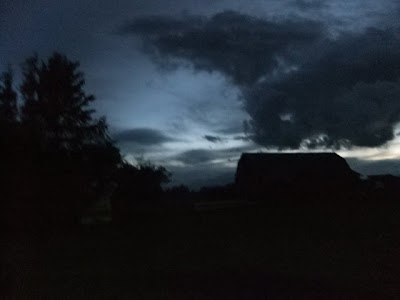 Thunder throughout the night is no longer an infrequent occurrence but has almost come to be expected. It's prudent to shut down and unplug the computer to avoid having to get out of bed and do it in the wee hours.

The vet sent sedatives for the old dog, to be given at the onset of a thunderstorm or when we notice she is hearing thunder even if we are not: she pants and paces. Instructions on the bottle said "Give two. Give a third if necessary. No more than three in any one day." Scott gave Casper two last night around 10. Twelve hours later she put us in mind of a dead dog, exceedingly slow to respond to our calls, to raise her head, to stand. Even tonight she looks like she's been "rode hard and put to bed wet," as the saying goes, although she eagerly accompanied me on an evening walk so clearly she's okay.

Next time we'll try just one pill. It was pretty pathetic, watching her oh-so-slowly lift her head this morning when I stepped out the door and called her from her sleeping position under the caraganas. For a few tense moments we worried that she was not going to move ever again.
Posted by Blondi Blathers at 10:50 PM 3 comments: