We've Made It Another Year 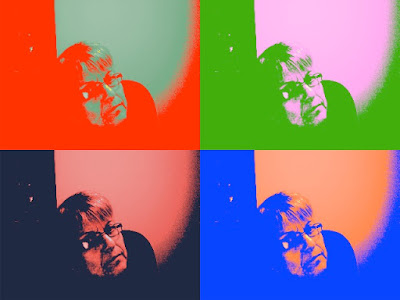 You see four of me? What have you been drinking?

It's cold and snowy outside, warm and toasty inside. Just me and Emil all week; "quiet," he says, without Everett and Scott in the house.

I've got to work a bit yet before driving a mile south to stay overnight with Emil, watching comedy specials on the tube. Maybe he'll be up for his favourite movie, Roger Rabbit, tonight. He always says he wants to watch it with me, but never feels like it when I suggest it. Whatever happens, it'll be a lovely relaxing evening in front of the woodstove.
Emil and I are missing Scott's nephew's wedding shindig in Calgary tonight, so Scott will have to cut enough rug for both of us. The whole clan "motored to" Calgary, as they used to say in our local news write-ups. Unfortunately Scott didn't take the camera; but he did get a blackberry and can take pictures with it. Which should be useful for my blog, because he has a good eye. He didn't take the blackberry either. He didn't leave his head behind, no. What do you mean?

So here's to you ...
[I'll tip a glass later, in front of the Christmas tree]
See you on the flip side, as they say.
Posted by Blondi Blathers at 7:20 PM No comments: