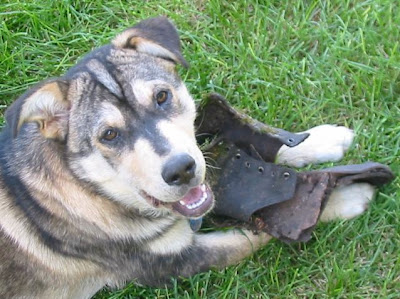 From somewhere in the bush she dug up this old moss-covered boot and dragged it onto the lawn, so pleased with herself.

Online life is getting back to normal since I borrowed Kate's modem (which she no longer uses since she's got wireless internet) to see if the problem with my iMac was a fried modem. And indeed that was the case. I hadn't been getting online properly for several days before there was a clap of thunder on Friday morning that woke everyone up with its volume, and it seems that was the last straw for my modem. Fortunately for me Kate's willing to part with hers so I don't have to make a special run to the city.

We hit 32C yesterday; it was hot hot hot. I think I mentioned before that Saskatchewan's heat record has now been broken due to the unseasonable weather. No complaints from me. But it's weird. Flowers that normally bloom in the spring -- lupins, for instance -- are in full bloom now. All the flowers are bursting out in glorious colour in this sunshine, while the maple tree that greets you at the driveway is spreading its yellow leaves all over the front lawn. Strange contrast. I'm happy to see that my jalapeno plants are getting a chance to finish growing their peppers, which I'll chop, bag and freeze to make salsa. My spicy-food-lovin' fella eats an entire batch of it every month; I tell everyone he even puts it on his ice cream.

Everett got up on Monday morning with an eczema-like rash on his forearms and under his eyes. Scott thought it looked like hives. Everett says he's eaten nothing unusual. We had him take an Aerius pill for allergies once a day, and I pulled chickweed from the garden and made two teas: one for him to wash his skin with, and the other to drink. The rash is on its way out.

It makes a very tasty tea. I also steamed some of it; you can eat it like steamed spinach. Delicious. And here I've been tearing it from the ground every year and throwing it away! Must pick and dry some to have on hand through the coming winter, along with the plantain leaf for cuts and bites and stings, the yarrow and spearmint for colds and flus, and so on. My house is full of drying herbs in paper bags with holes in them for ventilation so they don't get mouldy. I took the dehydrator over to my aunt Shirley's after it ran steadily here for weeks; she's going to dry tomatoes in it, and I'm going to let my herbs dry naturally instead. I've got calendula flowers steeping in olive oil to make not only a tasty salad dressing but an anti-inflammatory massage oil, which I will try on my neck next time it acts up, and Cara, it is supposed to make a good baby oil -- I'll give you some to try and you can let me know if it works wonders. Only a month till I'm holding a new great-niece or -nephew in my arms ... and how nice that I don't have to do any of the work to make it happen. Can't beat that.

I stayed over at the old house last night to watch the first episode of Eastwick, starring Paul Gross as the troublesome warlock who comes to town. The show didn't impress me in the least and if it doesn't improve it won't be on the air long, and Paul Gross is no Jack Nicholson (remember the movie The Witches of Eastwick?), but he doesn't have to be. He's just plain good to look at and I'll watch the show for that simple pleasure, as well as to see what Gross makes of the part. I told Scott, who watched with me, "He's almost as good-looking as you are." No I did not take Sweet-Talking 101 at university but some things you just learn over time, right ladies? (as Ellen Degeneres would say; I love her show, or parts of it, but don't watch it very often come spring).

With what looks to be another beautiful day in store, it's not going to be easy to sit indoors and catch up on the hours of work I've missed since Friday. This morning I'll go over to GGFarm and stroll through the garden, keeping company with my old girl Casper and my little girl Chloe as well as Ralph the black cat, my familiar, who follows me through the flowers, sits nearby and comments in his deep voice from time to time.
Posted by Blondi Blathers at 8:18 AM No comments: