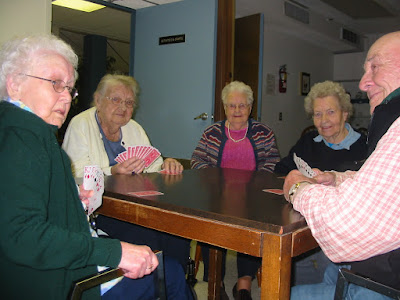 An evening's entertainment at the nursing home in Kelvington.

Grandma, on the far left, is playing Norwegian whist with her girlhood friend, Esther, next to her. The lady in the pink sweater is an observer, as was I.

Esther said that it used to be common to get a four-day stretch of rain, but that one never sees that anymore. After the past few days she may be withdrawing that pronouncement. It rained off and on all day yesterday, thundered and rained all night (Casper ripped the screen off the door, trying to get into the house), and is carrying on today. Which is why I'm over here, baking bread. Might as well make hay while the sun shines, or in my case, bake bread while the heavens empty.

The motor for my kneading machine has finally been repaired so it's getting a test run. It saves me huffing and puffing (and giving my pecs a workout) for 15 minutes over a huge hunk of heavy dough comprising 15 cups of whole wheat flour and six cups of oatmeal. I love my kneading machine. In four hours I will be loving fresh, warm oatmeal bread slathered with butter.

Esther reminded Grandma of their schooldays, when together they walked more than three miles to attend the one-room schoolhouse with about 60 other youngsters of all ages. When it was raining, they'd arrive soaked and cold and would stand by a furnace trying to get warm. I asked, "Didn't you take umbrellas to keep dry?" Esther said they wouldn't have been caught dead carrying an umbrella; you had to be tough, in those days.

I can't imagine myself letting my kids out the door in pouring rain to walk three miles without an umbrella. She's right; kids must have been far tougher.

Speaking of kids, Emil turned 21 today. It's still hard to believe that my three-pound baby is now a young man who weighs more than I do. At his request we have a storebought birthday cake and he hopes to go to my sister Karen's this evening to share it with her and Uncle Dick, as Emil calls my brother-in-law. If we can catch them at home and if they're willing. Nothing like waiting till the last minute to plan things, although I ordered the cake on Friday.

Hi Cath,
We've had rain for several days in a row now; thunderstorm so loud and continous last night that old Casper tore the screen off the door, trying to get in. TWO dogs scared shitless of thunder; oh goody. Hope Casper doesn't pass it along to the puppy, who at this point seems to be wondering what all the fuss is about. I need to get to a pet store and buy some kind of sedative to calm these animals when they get into this state of hysteria, before one of them goes into shock and dies on us. Apparently it can happen.
Emil goes to camp on Sunday Aug 16th so that's our night for a sleepover. I haven't booked us a room yet.
I'm over here to bake bread, since it's cooler than we're used to lately. But it's still quite balmy, rain or no rain, and it's thundering again dammit so I suppose I should shut down my computer. I'm about to use the kneading machine but the repair guys didn't fix the break in the electric cord so Scott suggested I wait till he gets back here with some electrical tape. Unfortunately he went to his parents' to put in a load of clothes (told you the washer has been leaking here?) and his sister from Denare Beach is there so obviously he's not hurrying back here, aware that I am w.a.i.t.i.n.g. He's accustomed to making me wait, I guess!
It's Emil's 21st birthday so he likes the idea of me and he being alone here all afternoon, anyway. Still his mama's boy. If he had his way we'd go out for supper and leave Scott and Everett at home. Brat.
Don asked who was with me at the concert; he didn't recognize you. I said I'd tell you that you were looking so much more gorgeous than the first time he met you, if that's possible, that it's understandable he wouldn't be sure who it was. He said yeah, tell you that, and insist that you come out for every house concert from now on. There is one on the 28th, a bluesy band with a female lead. I forget the name at the moment.
Oh here's Scott, will go see if my machine works.
Say hi to Sue-Q for me when you see her,
Kathy
Posted by Blondi Blathers at 1:27 PM 1 comment: