This has been posted before but what the hell, since Joanne mentioned him in her letter today, I'll show him off again. He really was a little cutie.

Yesterday when I dropped him off at the group home he tried, as always, to keep me as long as possible by bringing up new topics of conversation. He surprised me by saying "I think I'd like to move back to your place, Mom."

What?
My guess is that one night per week back at the homestead is not quite enough, and he needs to start coming out Fridays after work. We'll try that.

Might as well post the picture of the entire family at Grandma and Grandpa's anniversary, 21 years ago. If you click on it you'll get a better look. The face in the top left corner is my Yankee Doodle cousin Nathan, who couldn't make it to the do. My two sisters Joan and Karen are in the front, far left. I'm standing next to Mom and Dad on the far right. Grandma is in the front, right of centre, with a light blue dress, sitting next to her sister (Aunt Jean) in the red dress, and Grandpa is standing behind Grandma.

For those who don't know, Grandpa's name was Emil. This is an old name and not fashionable as a baby name anymore, but I find the names that are "in vogue" get overused. Many of my friends have the same first name as me. Everyone and their dog was named Kathy back in 1959 for some reason. Not saying there's anything wrong with Kathy for a name, but it's bland as a biscuit because it's ubiquitous. Anyhoo, now that Grandpa's been gone for so many years, I'm especially glad that I named Emil after him, because it is a reminder I'm glad to have. It brings back fond and warm memories of someone who was always very good to me.

I also think of Grandpa when I do a little jiggy happy-dance and blurt out a softspoken "Hoo-hooooooooo!" like he used to do in the kitchen sometimes, or when I ask someone if they "Need some cash?" or when I pour buttermilk onto my granola cereal or when I water my hollyhocks with a hose and sprayer in the summertime or anytime I eat little-finger-sized baby carrots from the garden. 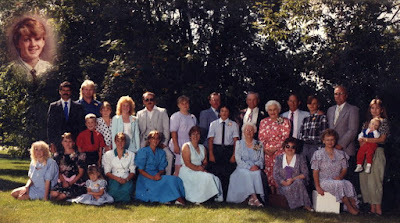 I don't miss my long hair. Not one bit.
Posted by Blondi Blathers at 2:51 PM 3 comments: