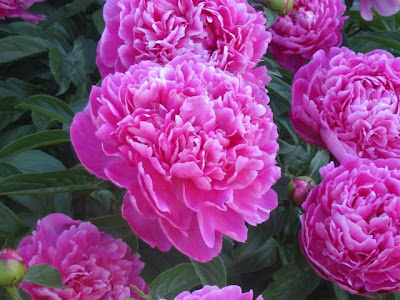 Alas, the poor baby didn't bloom this year. What chance did it have? The back step, by which it grew, was to be torn out so that the porch could be lifted and worked on, so my friend made a valiant effort this spring to dig up the peony. It would not budge, as its roots were so firmly embedded into the ground.

The next day, unexpectedly, a digging machine as large and rumbly as a dinosaur showed up and the next thing I knew, the step was gone and the peony sat torn up by the roots, in three pieces, on the grass near the gaping hole left by the cement step. I quickly dug some holes in the garden and planted the roots, and the plants are alive and well in two spots, but didn't bloom. Oh, one of them tried valiantly; it formed little round buds and everything, but they shrivelled and dried up instead of opening. I'm not sure why, as the half-dozen undisturbed peonies in the yard are doing their thing right at this moment. They are light pinks and whites though, not this brilliant pink that I love.

Ah well, there is always next year, says the hopeful farmdweller.

Brought Aunt Reta home from Saskatoon last night; she'd flown in from Phoenix on Wednesday and had been staying with her friend Janet till I picked her up yesterday. She'll be here till Aug.19th.

And Gord has emailed me that Cameron has a load coming out here tomorrow (he's a trucker) and so I will have my boys home tomorrow night. If I listen carefully, I believe I can hear them wailing all the way from Edmonton. They are never ready to come home.

House update: when I got home at 11 o'clock, there were windows installed in the master bedroom and the office. Today Scott's got his nephew helping him so, as I've just finished my work for the day, I'm about to go over there and see what they've accomplished. They were here for lunch but didn't give me a report.
Posted by Blondi Blathers at 2:10 PM 1 comment: