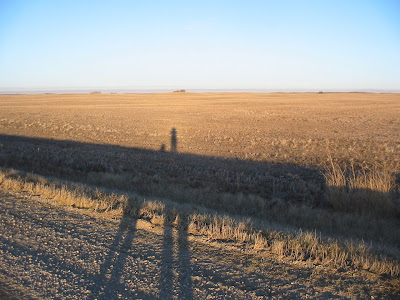 Me and my shadow -- an adolescent Husky/Shepherd cross named Chloe.

I put in four hours on my day job and then, particularly in this gorgeous weather, head out to walk with the girly-sues.

This week Emil and I have been living with mild chest colds, so my walks are short. I don't want to tire myself out. As it is, by suppertime I feel like lying down anyway.

Late in the afternoon I go over to the old place to see Emil and Everett after school and make supper. Once the meal and cleanup are out of the way, and there's been a chance to catch up with Scott after his working day, I hop into my van and drive back here to work an hour on a part-time project I'm involved in (fascinating; involves extensive reading about World War II, which I know far less about than I realized). I aim for bed, and my library books, at about 9 o'clock; but that's on a good night. Lately I don't seem to get there till 10 or later.

Right now I'm reading The Flying Troutmans, by Miriam Toews. It's about a young woman who returns from a broken relationship in France to take care of her sister's two kids when her sister ends up in a psychiatric hospital. They take an odyssey across the States to find the kids' dad. Toews is the author of A Complicated Kindness, which won the Governor General's Award a few years ago and was a finalist for the Giller Award. Great sense of humour, this gal.

This ice wouldn't hold me yet, but it's so tempting to strap on my skates and go for a glide. 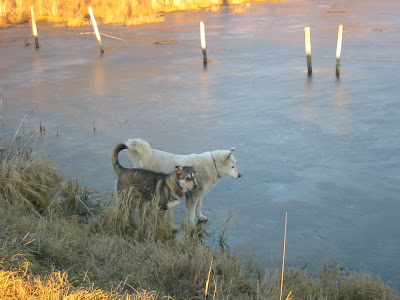