Emil at the Lodge 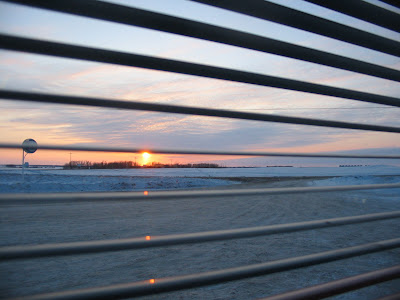 Looking out the café window at suppertime.

On Sunday we finally got to Kelvington to see Grandma, after stopping for a fast-food meal at the service station at the highway. I gave Grandma all my excuses for it being so long since we'd been there: stormy weather snowing us into the yard; Emil's cold lasting too long; this, that and the other. Her response: "Oh, is that it?"

After two hours it was time for her to get ready for bed so she walked us to the door. Emil had worn winter boots instead of running shoes, and sat on a piano bench inside the front door to pull them on. Grandma sat in a chair against the wall, alongside two other residents who watched Emil's progress with some interest. He had a lot of trouble, but did not want me to help, so Everett and I waited patiently. And waited.
He struggled to hold his foot up so he could get hold of the boot; oh it was painful to watch, believe me.
"Good thing there's no fire," I said. "Are you sure I can't help you?"
"No, I can do it myself."
We waited. He kept trying. No luck.
Finally I suggested that the liner in the boot was twisted or squashed and maybe I should have a look. Emil thought he needed to sit on a lower chair, then he'd be better able to manage. He moved over beside Grandma and carried on, but took off the boot and let me straighten the liner first.
The lady and gentleman watching had been making comments to each other: "His foot is turned the wrong way" and "I used to slide a plastic bag over my foot."
Finally the lady told Emil, "Put a plastic bag on your foot and it will slide right into your shoe."
Emil got excited. "Actually," he said, "it's a boot, not a shoe!"
She looked perplexed. I explained that Emil thinks very literally, and always corrects me when I say, for example, "It's nine o'clock" if it's actually five to nine. Or if I tell him to go get in the car, when what we drive is a van. Close isn't good enough. He can never let it slide, even if he's understood what I meant.
They got quite a kick out of that.
Posted by Blondi Blathers at 9:54 AM 1 comment: