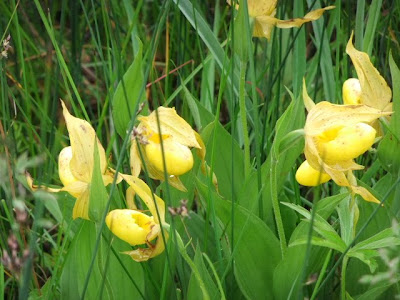 Here you go, Lasse: lady's slippers or, as you call them in Sweden, cuckoo boots.
These are already starting to wilt. There are quite a few in the very wet ditches along our road.

Everett’s Grade 12 classes have ended. His exams end Thursday, and then school's out for him, as it has been for Emil since yesterday. I ask him what he would like to do to celebrate. Go out for a meal? No, he says; all he will eat in restaurants are grilled cheese sandwiches anyway, and the portions are never enough (he could have two orders, but that hasn’t occurred to him). Have a barbecue and invite friends and family, like many graduates do? No; that doesn’t interest him. Well, what? “It would be a treat to me if I could have the house all to myself for an entire day,” he says. Perhaps that could be arranged. Little bugger.

He phoned Dad to thank him for the gift of money, and later I joked (because everyone brings this up), "And did he ask what you're going to do now?"

"Yeah," Everett said, "and he told me I would have to do something, but that there's no point him telling me anything because I have to figure it out for myself."

He added, "That's the smartest thing anyone has said!"

Excerpt from a diary entry of my favourite diary-keeper, Anaïs Nin:

July5, 1939
I'm restless. Things are calling me away. My hair is being pulled by the stars again.