Days! It's been days since I've posted an entry! The time, she flies.

See that red and white half-ton? It's been sat in the middle of our farmyard for the past year. Finally yesterday Mr Man decided to move it out of sight, probably so he doesn't have to move snow around it all winter. Now it can go kill the grass underneath it, somewhere else.

That was yesterday. You know, Sunday, when many people in this country take the day off and laze about. Not farmboys though. Mine was out with his little brother taking care of cattle for several hours, then in town shovelling snow at the current construction site, before cleaning up in the late afternoon and heading to his sister's in Kelvington to watch the Grey Cup game. (Does anyone in Saskatchewan not know that the Roughriders won? Didn't think so.)

I stayed home for what our friend Faye aptly described as a "pyjama day." After Friday night and most of Saturday at Everett's, watching Dr Who (two more seasons to watch before the new season begins, and a number of Christmas and other specials; but now that the kid doesn't live in the same house as me, it's not so convenient), I stood looking out the windows late yesterday afternoon and had to talk myself into going for a walk. It was melty out and so I definitely should've (I'd been a lazyass since my last day off, Wednesday), and nearly let myself off the hook yet again. But I took an inward listen after asking my body the question: What do you want to do? The answer was a firm Get Out and Walk.

So I left the kitchen-cleaning and halted the baking of caramel corn, and cooperated. The way I see it, if I want my body to be healthy and fit (i.e., to do what I want and expect it to do), I have to do my part. I can't keep making demands of it, and not keep up my end of the bargain. And out I went. 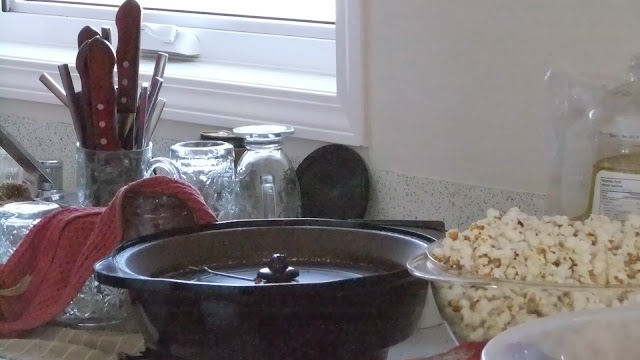 In the good news department: Aunt Shirley phoned yesterday and said Joanne B will be moving back to the lodge in Invermay. This will put her back in home territory, where she will be happier and it will be easier for family and friends to go see her.

Oh, and my son prepared for my overnight visit by stocking up on a variety of treats (damn pretzels! I may have OD'ed on them) and making something delicious for supper Friday night. I couldn't eat the half of it but did taste everything he served up, at least.
Posted by Blondi Blathers at 8:05 AM 2 comments: