Still having problems with birds slamming into the windows. I haven't ordered the zen windowsavers (see above) because Scott has an idea for something similar he can make himself; it's waiting for him to do it that is the problem now. Yesterday a redpoll died instantly when it hit the glass; I went out to make sure the dog didn't get it, but it was too late, it had bled from the beak and was dead.

We thought maybe if I turned on the flashing Christmas lights hung on the window, even during the day, that might do the trick. But no; the redpoll above flew into the glass anyway. Fortunately it was only sitting in the snow stunned when I got to it, and after perching where I set it on the feeder for 15 minutes or so, it flew off.

Last week a hairy woodpecker hit the window and by the time I got out there one of the tomcats had it, still alive, in his mouth and was making a dash for the tractor shed to kill and eat it. I didn't try to get the bird from him at this point, as a quick death would be better for it, I figured, than being injured and in shock if and when I could catch the cat and extricate the bird from his deadly jaws. My heart sank, though, and remained low for quite a while, and sinks each time I recall the scene.

Which is why I was more than happy when a neighbour whose barn needs mousers came yesterday and took the two yearling tomcats home with her. I miss them, friendly fellas that they were, but I don't miss seeing them under my oak trees stalking the birds at the feeders or quickly snatching them up when they hit the window and fall stunned to the ground.

In appreciation of her new cats, my neighbour brought me 18 of her hens' most beautiful eggs, two of which made me a delicious breakfast of scrambled eggs this morning. 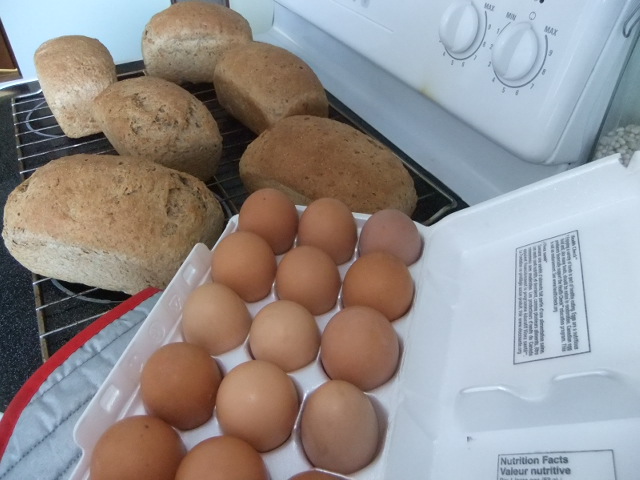