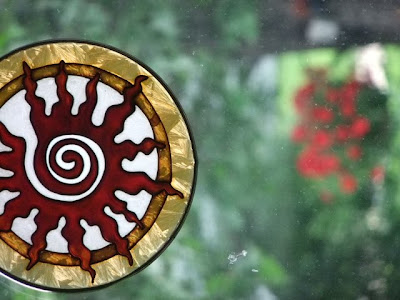 In an effort to alert the birds to the large panes of glass that are our windows, I bought a bunch of these suncatchers and stuck them up. 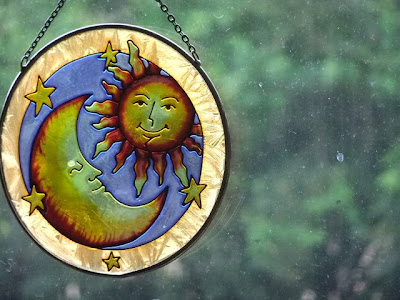 It didn't work and this northern flicker was downed last Tuesday. When he tried to walk, for two days he'd fall on his face. The third day he was jumping to the top of the box; the fourth, he was scrambling around to get out; on the way to the small animal clinic in the city on Saturday, he was poking his head through the holes in the cardboard box in his efforts to escape. But alas, he still couldn't fly. 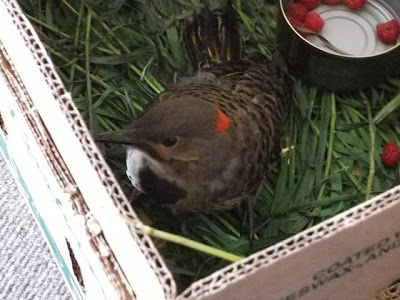 We dropped him off at the clinic and phoned back on Tuesday to see how he was. The vet told me the flicker had a broken shoulder/collar bone and they would rest him for two weeks. In that time it would repair itself and the flicker can be released. They'll even try to release him back out here, if someone happens to be coming out and will give him a ride.

Next: I crunched tin foil into balls, tied embroidery thread to it -- after all these years I'm using up some of my embroidery thread again; last time was when putting appliqués on the quilt I made with Mom. That's more than five years ago -- and Everett climbed a ladder and stuck them to the window frames with sticky-tack.

You can see why the birds might be confused when they see the reflection of the trees and sky, as they do. 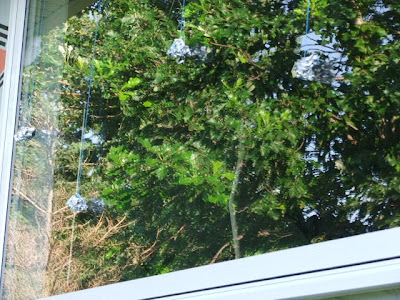 The balls move easily in the breeze but I think we may still add a few. Uncle Neil says to hang some old CDs out, too. We'll try that, but further out from the glass.

Emil phoned Neil the other day and invited himself over for a visit. We went yesterday afternoon — I made Everett drive, now that he has a learner's licence; he needs all the practice he can get, even though he'd as soon not, he says — and Emil showed off his singing skills, with The Morning Song (well, that's what I call it) and The Juicy Fruit song, from a commercial.

Then he asked me "Am I a good singer?"

Well, I lied. Sometimes you have to.
Posted by Blondi Blathers at 8:36 PM 3 comments: