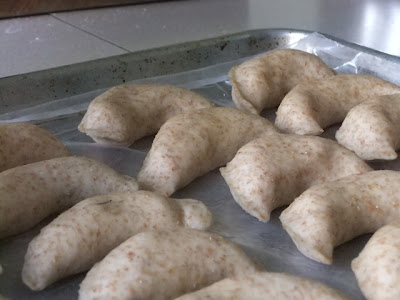 Everett learned to make perogies in home ec class when he was still in school, and had a little "pinching practice" when he helped me and Karen once or twice during perogy-making bees. Earlier this week he started talking about making fresh perogies, just enough for one meal, and yesterday he went for it.

Now, there is a reason most people don't use whole wheat flour to make perogies. It's heavier, and has more flavour, than white flour. But my Everett has "the touch" and although his perogies with their whole wheat casings do not taste like your average perogy, they were still delicious. His cheese/potato filling was divine. I think he could give some of our local Ukrainian babas a run for their money.

The song recording I promised you was uploaded to Youtube for two or three hours yesterday, only to finish off with the message that an error had occurred and I was S.O.L.
What to do? Darned if I know.
First of all, why should it take two or three hours to upload a three-minute recording? I haven't suffered through dialup for a year already!
If you are computer tech whiz, feel free to jump in here with advice. I would like to be able to share the recording. If I'm lucky Scott will spend some time figuring out where I went wrong, and will have better luck with it. He's got a hell of a lot more patience than I do when it comes to computer glitches.

From Love’s Alchemy, Poems from the Sufi Tradition:

Regardless of how much knowledge
You might acquire,
You are still ignorant
Without action —

You would be neither scholar nor learned,
But an animal carrying books.

A donkey doesn’t know
whether it’s carrying books
or firewood.

8:21pm
Scott phones for a pickup from the other place and I go out and walk toward the van. It’s dark and it’s raining lightly, and the yardlight is sparkling on the grass, and for a moment I am reminded of snow and disappointed that it’s only rain. I am startled to find myself looking forward to the beauty of winter.