We were on the way to town on Sunday to take Emil back to Aylesbury House, and I had to stop at the highway and try to get a photo of these sundogs. I had never before seen them touching the ground, or so tall. This isn't a great pic, but ...

The next morning I hopped on a Saskatchewan Transportation Company bus and headed off to Regina.     Road reports in the winter often stress that highways around that city are in bad shape due to blowing snow and poor visibility and ice, and come with warnings not to drive there if you have a choice. The forecast was for quite a bit of snow and a dip in temperature, so I avoided the anxiety that comes with all that, plus city traffic that I'm no longer accustomed to driving in.

The three-and-a-half hour trip turned out to be quite pleasant. There were only a few of us on the bus, the landscape viewed through its large windows was lovely, and I had a book along. What's not to love? Except maybe the extremely out-of-shape gentleman a few rows behind me who sounded like he might cough up a lung or two at any moment, along with the garlic sausage he apparently ate for breakfast. I prayed I wouldn't be called upon to perform mouth-to-mouth resuscitation.

When we pulled into the bus depot  in Regina I decided to walk to the hotel where I was to meet my friend Cathy. It was only two or three miles, and since I'd be missing my exercise for several days this seemed like a perfect opportunity to fit it in. And it was — there were some lovely old buildings along the route, and it wasn't all that cold out — but as the traffic was heavy, the sidewalks were icy, and my backpack began to weigh a ton after the first mile, I was beat by the time I got there. Nevertheless it meant I'd spend the next couple days without feeling I "should" get out walking. I could just focus on spending time with Cathy, and that's exactly what I did.

We spent the first morning and half the afternoon just talking over a long, leisurely breakfast. Then we headed off in Cathy's car over the snowy roads of Regina, with two thoughts: visit the Natural History Museum, and follow our noses after that. The city was absolutely beautiful, with its many old buildings and variety of architectural features, all covered with a thick padding of fluffy white snow and hoarfrost. We missed the entryway to the museum, and turned into the legislature grounds to double back, but the impressive Legislature Building (the largest legislative building in the country, according to The Canadian Encyclopedia) drew us in. 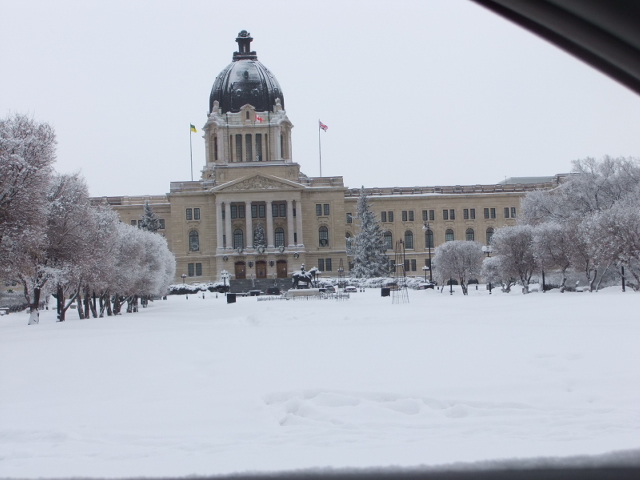 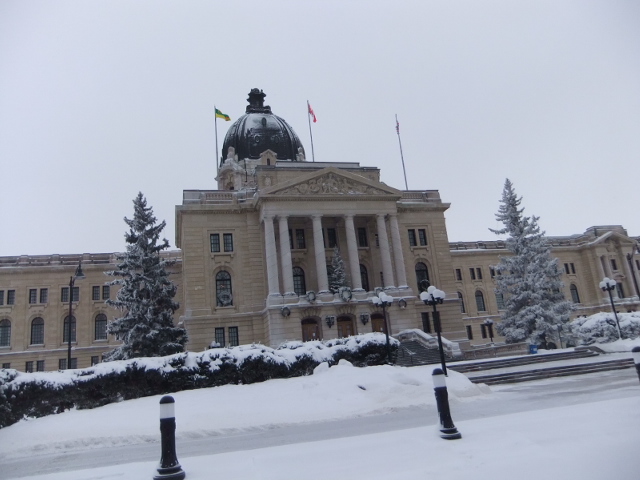 But more later. It's time to get back to work here at my desk. I had a fine time, but it's good to be home, too.
Posted by Blondi Blathers at 11:35 AM 6 comments: