Snowy Day in May 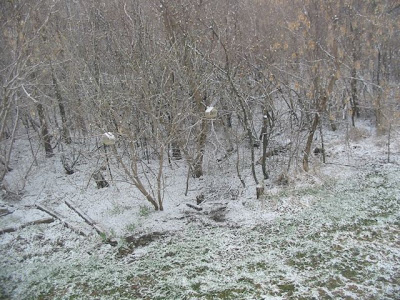 Yeah. I am not frigging kidding. Took this picture early this afternoon, through the kitchen window.

On the positive side, He Whose Name Must Not Be Mentioned left the Saskatchewan Birds book open on the kitchen table before leaving to school, to the page showing the rose-breasted grosbeak. There were a half-dozen pairs out there to be admired. Guess they're passing through. I didn't think to get a picture of them chasing the smaller birds away from the seeds on the ground.

The boys' dad had driven out from Edmonton to go along with the Grade 11 biology class on its trip to the Moose Jaw tunnels and Grasslands National Park. The plan was to sleep in teepees last night. I had made my son wear his winter jacket, which turned out to be a good thing. The underground tunnels were fascinating; I remembered to send the camera along with my kid, but he forgot to carry it with him when they toured the tunnels. Too bad; I've never been there. They say Al Capone smuggled liquor through the tunnels. That was cool, I was told, but it was depressing to see where the Chinese had lived underground while building the tunnels. They were housed in terrible conditions, paid slave wages, and abused when they appeared aboveground among the precious white folk.

The national park was busy digging itself out from under a foot or two of snow, so the overnight part of the trip was cancelled. Just as well.
Posted by Blondi Blathers at 9:33 PM 1 comment: