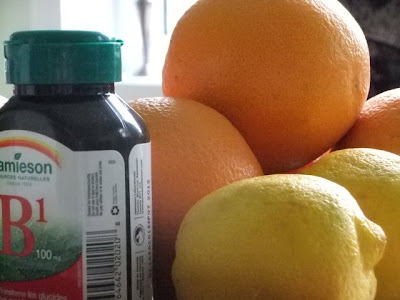 Several years ago I read that if you eat bananas, mosquitoes are attracted to you. If you eat citrus fruits instead, mosquitoes are repelled by the smell of your skin. So for the past few years, in spring I stopped buying bananas and didn't start again till after the first fall freeze, when the mosquitoes were done for. And I ate an orange every day.

It didn't do the trick, though. Mosquitoes still liked my blood.

A couple weeks ago I attended the funeral for my great-uncle in Lintlaw, and the next day went back to visit with some relatives who had come to Saskatchewan for the occasion. Dad's cousin Mavis (that makes her my first cousin once-removed, I've been told; not my second cousin) was among the group sitting in a shady circle under a tree. The mosquitoes attacked me immediately. I had eaten a banana for lunch, having given up on my "No bananas from May to Sept" method.

Mavis told us that she and her parents had tested out the banana/mosquito theory and her mom, the one who had just eaten a banana, was viciously chewed upon by mosquitoes while Mavis and her dad, who had eschewed the curvy fruits that day, were ignored. It worked for them; the results were immediate.

She also said that if you take Vitamin B1 the mosquitoes won't like you. So I went straight out and bought some, and put it on the kitchen table so I'll remember to take it. It's been a week or so and so far the mosquitoes still bite, but not as much as they might. I'll report again later.

Right now, I have to go out to the correction line to meet my sister Joan, who can't remember how to get here. She's been in Saskatoon since Wednesday taking a photography course, and has rented a car to come out here and visit her sisters et al. Better go, before she gets there and drives on past if I'm not there waiting!
Posted by Blondi Blathers at 4:37 PM 5 comments: