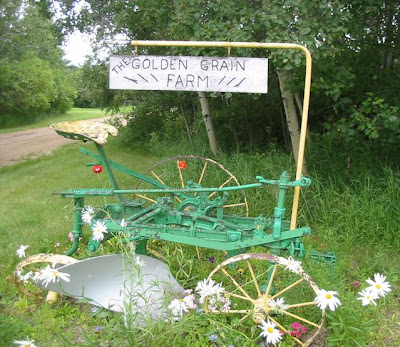 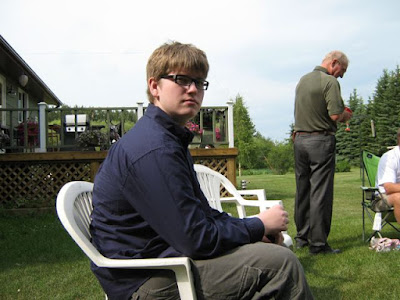 Everett at the family reunion. That's Dad in the background.

4:30pm 19 Aug Wed
I walked in the door on Monday after driving home from Manitou, expecting to see a kitchen full of dirty dishes. Everett had been dropped off by his dad in the morning and I was pleasantly surprised to find that the dishes were washed and stacked on a dishtowel to dry. I thanked him with obvious delight and called him “My hero!” He remarked matter of factly that he’d done them for “extra credit,” which was a joke, but I caught a proud little smile from the corner of my eye.
Now it’s raining and he’s making cookies as I finish up another hour of work here at the computer, and he’s bringing me nibbles as he goes: a few chocolate and butterscotch chips in a bowl with peanuts, a teaspoonful of dough. He’s spoiling me.

8:38pm
Everett and I are talking about finding a movie to watch together tonight. He says, “But you won’t like anything we have.”
“What would you like to watch, that we have?” I ask.
“It doesn’t matter, you won’t like it. You don’t like action movies. You only like movies that have no conflict. No conflict at all.”
“All movies have conflict,” I retort.
He raises his voice and, as if mimicking a character in a movie, begins to drone. “Let’s divide this room by half and you stay on your half and I’ll stay on my half. But you can come over on this side if you want, I don’t mind.”
He goes on and I chuckle; he's not far off.
“These pancakes are delicious.” — “Glad you like ‘em.” — “I’m glad we’re friends too.”
I’m giggling now. But there’s more.
“Oh wait, I have a headache. Well, that’s okay.”
And then, “I’m making some popcorn. Do you want some?” — “That would be lovely.”
Kid's got my number, or, as his dad said when I noted that Everett makes himself scarce so that I won't give him something to do when he's idle, "You didn't raise no dummy."
Posted by Blondi Blathers at 8:57 PM No comments: 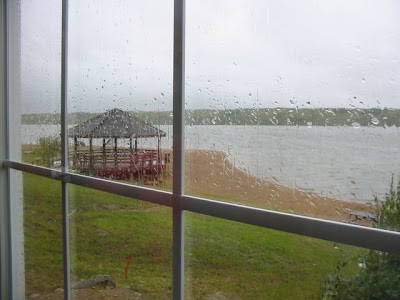 The view from the Village Perk, where I had a solitary lunch before Cathy and Emma arrived at Lake Manitou.

I have a shitload of photos to show you but organizing them on the Blogspot pages is such a pain in the butt that I'm reduced to having only one photo per entry, unless I have the time and patience to dick around editing, editing again, editing again, and so on, so forth in order to get the descriptive cutlines where I want them. No time, no inclination, sorry.

It's been raining pretty much steadily since yesterday afternoon, not long after Cathy and Emma left to make their way back to the city. I've been at the desk working all afternoon, taking breaks for lunch and to carry laundry next door to the working washing machine. Been doing this since sometime in June and it's getting tiresome, except for the opportunity to visit for a few minutes with Scott's mom each time I go, when lucky enough to catch her at home.

The machine downstairs here started leaking and we haven't replaced it because we're moving soon and plan to buy a new set for GG Farm, and the machine left at GG Farm by the previous owners isn't hooked up because we have been having problems with the overflowing, backing-up sewage lagoon and don't want to run more water through the system than we have to. Whatever. One more minor inconvenience to add to the list. Could be worse: I could be Scott, dealing with sewer pumps and all that goes with them.

Two men are the owners of The Village Perk and one of them makes the best pecan pie. I always have a piece when we stop there, but sadly the last one had sold before I arrived on Sunday, and on Monday we left shortly after breakfast. I'll have to look in again, with high hopes, when I pick Emil up from Camp Easter Seal on Friday.

You can see the front wall of The Village Perk by clicking here. I don't know whose photo stream this is or who the lady in the picture is or what any of it has to do with the Maldives online dating site, but there's the coffee shop, anyway. While googling for other photos taken around Manitou Beach I found this, a travel diary which describes some of Saskatchewan's rural residents as having a "bovine, slack-jawed" appearance. Ouch!! Thanks for nothing, eh? Assholes.

There are three shops offering vintage and antique wares in the resort village of Manitou Beach, and I came home with a tall, heavy brass ashtray that I will leave outside in the hope it will encourage visiting smokers not to leave their cigarette butts on the grass around our yard, as that drives Scott batty (I hardly notice them. However, it's not always me who doesn't see the obvious. Today while towelling off after his bath Scott bumped his arm against a picture that's been hanging on the wall for four years. He pointed out that it's sure to get knocked down and broken. After four years, said I, I'm not worried about it. He doesn't believe it's been four years, but I know it has). I also bought some old picture frames, with which I plan to make a large grouping of family photos, both new and old, for a wall at the new house; a set of silver salt and pepper shakers; a half-brick butter dish; and an old wooden milking stool; all the while coveting more and firmly restraining myself.
Posted by Blondi Blathers at 5:35 PM No comments: