Here I am, sitting down for the first time since 8 o’clock, after returning home from the drive to town with Everett. The last three hours have been spent mixing up bread dough, making a double batch of puffed wheat cake, throwing laundry into the washing machine downstairs, and so on ... constantly on the move.

I have also been doing dishes — they seemed never to end — and transferring the makings of chokecherry liqueur from one two-quart sealer to another, since the first one seemed to be leaking.

The bread is for some folks who special-order it, and the puffed wheat cake is for the market, so I am wearing a hair net while in the kitchen. That is the thing I most dislike about cooking for others. I don’t much like wearing a hat when working or walking in the sun, either, so it comes off at the earliest opportunity.

Everett needed sun protection while working in the lumber yard, and was determined it would be a fedora. He tried on some hats and didn’t find any that fit, but when Scott and I were in Humboldt a few weeks ago I picked one up that I thought would be perfect. It was made of a breathing type of material that would keep the sun off yet let heat escape. If Everett didn’t like it, Scott said he’d wear it at work himself, so I brought it home.

Everett turned his nose up immediately, without even trying it on. Why? Don’t ask me. It’s his way: to judge without experience. It’s what we often do at age 20, I suppose; we can be unusually narrow-minded know-it-alls at that age, and if that changes by the time we’re 50, we may congratulate ourselves.

Eventually the lad gave it a shot, though, and he’s been loving it ever since. Just the other day he said, “I never thanked you for the hat. Thank you.” I'm not sure, but he might wear it to bed nowadays. Ding! "Mother Knows Best." Next, to get him to unbutton the collars of his shirts and perhaps even roll up the sleeves once in a while. We have wondered if he is ashamed of his body or what, but he says "What's to be ashamed of? I like to be neat." Ohhh...kaaay... then why won't he iron his wrinkly shirts?

12:06 p.m.
The second sealer seems to be leaking, too. What's going on? They both leave a wet ring on the counter. A one-quart sealer full of pickled beans doesn't do that. It's a mystery. 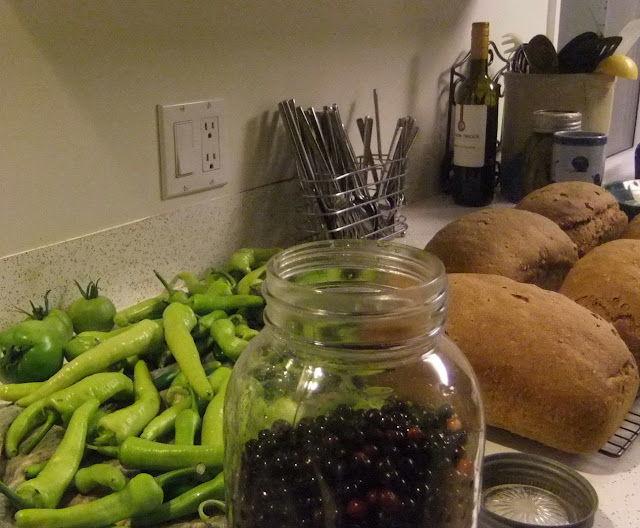 I was at my sister Karen's one morning this week and we had a few sips of chokecherry liqueur she made. It was so divine that I came home that very afternoon and picked chokecherries around the old house where we used to live, to make my own. Here's the recipe:

Clean berries and place with sugar in a quart jar, fill with vodka, put the lid on and set jar somewhere that you'll remember to give it a shake every day for two weeks. Then strain out the berries and voila: you've got chokecherry liqueur. Keep the finished product in the fridge.

We had frost two nights ago but hadn't been out to cover tomatoes or peppers, so Scott picked a few the next day. It looks like they'll be all right. Have I mentioned fall is my new favourite season? It smells great, it's warm but not hot, and there are no mosquitoes to speak of.

Yesterday I baked bread with organic whole wheat flour. This is my second attempt with the organic flour (besides being made from grain grown without chemical fertilizers or pesticides, the flour hasn't been treated with dough conditioners and other crap that doesn't belong in human bodies), which came from a good number of miles away and thus can be a pain in the ass to get.

It made a lovely dough, but I didn't like the end result; found it yeasty-smelling. This time I made some adjustments but still wasn't crazy about the bread. However, when Everett got home his eyes lit up and he polished off most of a loaf for supper and pronounced it excellent. Maybe I just have to get used to the difference between this flour and the regular stuff I've been using.

A message from "ChickenCow Hearing Clinic" was left on our phone yesterday. What kind of handle is that for a hearing clinic? Strange.
Posted by Blondi Blathers at 3:20 PM 4 comments: