Emil and his Great-Uncle Neil 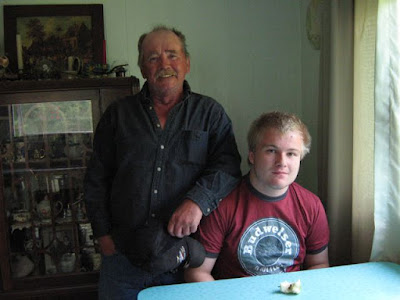 Uncle Neil stops in for a quick visit with Emil.

Neil had brought Aunt Reta out so she and I could go to Kelvington and see Grandma one morning this week.

We discovered that Grandma, who weighed 72 pounds when she moved into the nursing home in January, has since gained more than 30 pounds. Something is definitely going right for her there. The aides suggested we check out her pants because they are probably getting too tight for the little gal, who insisted one day last summer that she's never weighed 100 pounds in her life. So we've got some shopping to do.

Neil was a sparky tyke of nine or so when his oldest sister, Grace, had her first child. When that little girl was born, Neil visited the store, the service station, and every place he knew around Margo, our home town, with its population of—oh—two or three hundred maybe, at that time. The baby would be named Kathy, he announced, but if it had been a boy, he figured it should have been named Bartholemew.
Posted by Blondi Blathers at 8:24 PM 1 comment: