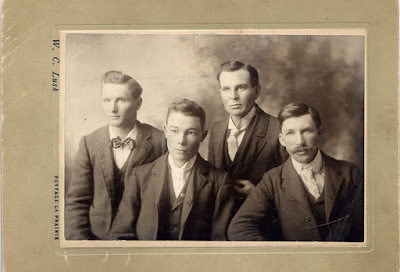 My great-grandfather, Grandpa Jack, is on the far right.

His youngest daughter, my grandmother, was already in bed when Scott and I arrived at Kelvindell Lodge last night at 7 o'clock. She wasn't asleep, but said she had nothing else to do. An aide came in to call her for the bedtime coffee snack, and she got up and accompanied us down the hallway.

"I have a heck of a time getting out of bed these days," she said, slightly off-balance. She's using a walker now, and kept saying she'd be going home soon, and wondering if we'd take her home after she'd had coffee, sure that her room was only temporary. I'd reply that she's been living there since January, and see all your stuff? Photos of your family on the wall and the TV, and look, there are your afghans on the bed, and there's your purse, and your clothes in the closet. Well, she'd say, she has a few things there but she's only been there a couple days. Tanya, Scott's sister who is a nurse at the lodge, says they have to keep an eye on Grandma now because she occasionally says she's going out and heads for the door.

I'm the eldest of all my siblings and cousins, and I remember Grandpa Jack quite well. He lived till I was about nine. My memory of him is as a sweet, tiny old man in a chair, but I also recall that he had a cane. He sported that impressive moustache all his life. Grandma has a photo of him as an old man, a small oval-framed headshot. I must make a copy of it. I have a very nice portrait of him and my great-grandmother taken about a year after they were married. In it, he's sitting down and she's standing next to him, but still her head is not far above his. They're dressed formally and look serious and handsome as hell.

It's a bread-baking day; I've got oatmeal in a pot, brought to a boil, and now it will sit, burner turned off, with a lid on for several hours before I throw it into the kneading machine with whole wheat flour and yeast, oil and honey, and perhaps some sunflower seeds.
Posted by Blondi Blathers at 8:41 AM No comments: