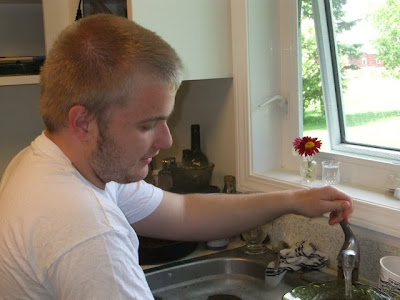 Emil spent a few days at home before we delivered him and Everett to their dad on Saturday. He did some dishes.

He doesn't like shaving (does anyone?) but I've made him do it, albeit poorly, since he first got whiskers. He uses an electric razor for safety; as it is, he tends to have one sideburn two inches longer than the other, and the odd bald spot carved into his hairline.

He turned 22 last week and I said what the hell, do what you want. So there's going to be a beard.

A room in one of the group homes in town opens up Sept 1st, and he'll be moving into it and starting his job full-time, as opposed to the one and two days per week he's put in over the past two years. He's looking forward to it all. "But I can keep all my stuff, right?" Right. That was his biggest worry about moving to this house, too.
Posted by Blondi Blathers at 1:17 PM 3 comments: