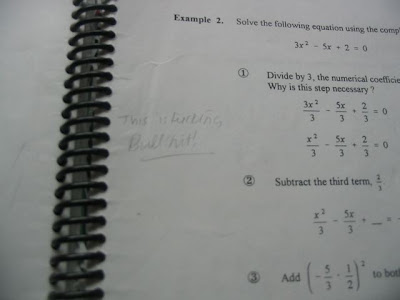 Someone left a remark in Everett's textbook.

Sometimes ya just have to.

When Scott says this is a house from hell, he may not be that far off. He did some painting in here this afternoon, then cleaned his brushes in the kitchen sink.
I smelled a strong sewer odour but thought it must be the paint fumes, though they seemed more intense and gaseous than before.
Finally Scott noticed the bathtub half-full of white liquid – what he’d washed down the sink had come up in the tub.
WTF? And it’s still there, even after he took the plunger to it.
He is hornswoggled as to what’s going on now; the kitchen drainpipe must be clogged somewhere, he says, but how on earth the liquid made its way to the bathtub ... It seems to be one thing after another and we are just shaking our heads. And cursing loudly, in his case.
Scott will figure out what’s wrong and what to do about it but one can see why he’s tired of the whole ball game.You’ve finally taken a step ahead and then have to stop and take care of some new problem. And it’s constant – one thing after the other. Will it ever end? It doesn’t appear so. What else can possibly be or go wrong with this place? It’s beyond common sense already.
Posted by Blondi Blathers at 7:54 PM 3 comments: