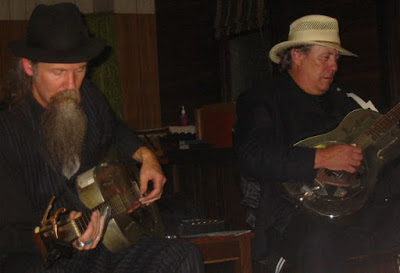 The pews were full. Halfway through the concert, Bev S., seated next to me, said, "Now I know why I hated church so much." Her ass, along with everyone else's, wasn't happy. Note to self: next time, bring cushion.

The Margo contingent even made an appearance. I sat next to Emil in the second row and when he saw Cuzzin O come in with his wife, he said loudly "Mom— Mom— there's Oscar and Barb!"

That was only the beginning of an evening where Emil made his presence known to all. Always a pleasure for Scott and me, who prefer to remain slightly less noticed at a public gathering.

"That's a Good Song!" Emil calls out at the end of a tune.
I was chuckling about this until recalling that at the last concert we attended, Paschall and Dahl, it was me who called out those exact same words. Oy. Where oh where does he get it?

Granted, there were only a dozen people in attendance that time. That's my excuse.

Today is the day of the week that households in our R.M. can drop off household garbage at the truck in Kuroki, so I made myself a double cup of tea for the road and headed down the grid, which is soggy with melted snow. There were a couple pretty soupy spots till I got to the highway, so I came home the other way. A round trip of about 40 minutes. (Karen, I thought of phoning you to meet me for a quick drink at the El Kuroki, but Everett's been looking forward to using the wireless so much that I didn't want to delay.)(Any baby yet?)

The weatherfolk are predicting temperatures of 14 and 16 degrees this weekend, which seems hard to believe when the air's hovering around 0C.

Wireless internet was connected up two weeks ago so it was well past time to get the computer to GGFarm and use it. After the schoolbus dropped the boys off at home, Everett and I packed up the iMac and lugged it over here. I'd dusted down the new desk (Hi Grace) earlier today, so we set things up and Everett sat down to check out one of his favourite sites, Red Vs Blue. I gave him an hour to websurf, while I soaked and scraped gummed paper lining from the bathroom wall, where the previous owner had applied a decorative wallpaper border. Got it about half off before it was my turn to come and play with this thing.

But I'm sitting on a stacking stool. Not good. Today, the computer. Tomorrow, the chair!
Posted by Blondi Blathers at 7:26 PM 1 comment: