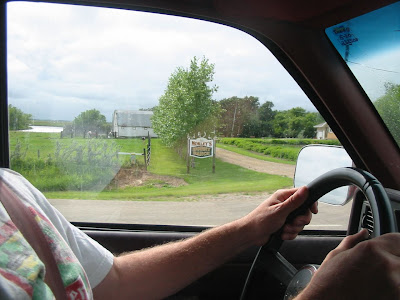 I did a double take when we drove past it on the way to Yorkton, and determined to get a photo on the way back. Unfortunately, we were running late to get to Scott's chiropractor appointment and it was raining, so there was no stopping. Fastened to the top of the sign are several sets of deer antlers.

Scott has a good number of Pilsner beer t-shirts, which came for free in boxes of Pil. Good beer, if I who know nada about beer may say so. However, since Pilsner is no longer Saskatchewan-owned, my beer-swilling spouse now buys only Great Western, which is Saskatchewan-owned. We like to support our local businesses; it's a Saskatchewan tradition.

The fellas are shingling the roof today and I have my fingers crossed that Scott will also get a chance to put in the new, larger dining room window. I doubt it, but you never know. However, he's moved the kitchen table out of his way so I know the new window is imminent. I am more excited by that than anything.

The news today is sad. The remains of a child found in Ontario yesterday are confirmed to be eight-year-old Tori Stafford. I knew she was probably dead, but since there was no body there was still a glimmer of hope, even though the kidnappers claimed to have killed her. It's beyond understanding.
Posted by Blondi Blathers at 10:04 AM 1 comment: