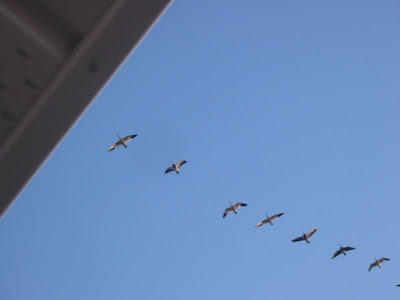 It's like the skies are filled with swarms of mosquitoes for as far as the eye can see. Only they're loud mosquitoes; last night the flock that settled in the field southwest of our house drowned out the already-loud singing of the frogs in our own yard.

All night. They were still gabbling this morning when I woke up. I wonder what that's all about. Are they smaller flocks meeting for an evening's mating dance? Previously acquainted flocks that have lots of catching up to do? Parts of the same flock that have to compare notes and make plans for the next day's flight routes? Maybe the intense noise keeps coyotes and foxes at bay when the birds can't see their predators approaching in the dark.

Saskatchewan licence plates say "Land of Living Skies" and there are some folks who don't see the significance of that. I laugh when the CBC does its radio call-in shows and someone calls in to say the "motto" is meaningless. Where are these people's heads, I wonder? They must either be city dwellers who don't experience this display of bird migration and have no idea what they're missing, or they are people who never look up and don't listen to what's going on around them. The secret: be still, be quiet for one whole minute. How easy is that? And with the snow geese flying over on their way to northern nesting grounds, you don't even have to do that much. You can't miss 'em.

Granted, we live on a migratory flight path. Maybe we're just lucky. But I imagine most of the province is passed over by these huge flocks of birds, and not just snow geese either. There are sandhill cranes, too, giant long-legged birds that stand like flamingos as they feed in the stubblefields, and fly over, high, in slow, lazy circles.

A few of the snow geese last night, seen from my back step: 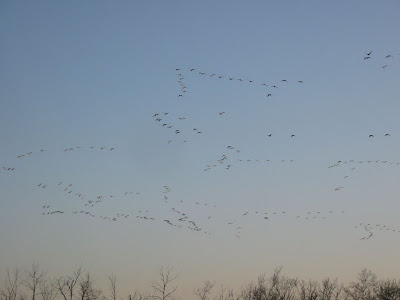