When I was in Kelowna at Joan's we watched the documentary about Amy Winehouse, an incredible vocalist with serious addictions that killed her at age 23. So young and with so much life ahead of her! And what talent she had ... what she might've done with it ... what a sad ending.

She was thrilled to meet and sing with the legendary Tony Bennett, who remarked that she was the best jazz singer that ever was. Now that's saying something! He also said, wisely I thought, after her death, "Life will teach you how to live it, if you live long enough." So just hang in there, you young people contemplating suicide as an exit from the discomforts and dissatisfactions of life. Just hang in there, because nothing lasts forever. Everything changes.

Cathy arrived from the city yesterday afternoon as I was returning home from a walk. 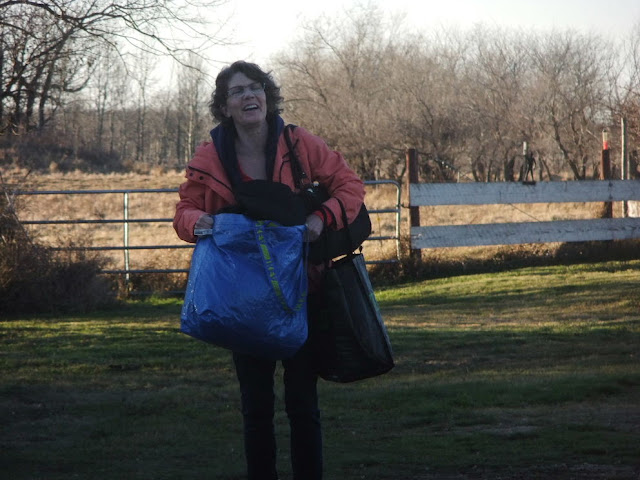 She had picked up some fresh herbs for me, as I couldn't get them at the store in Wadena, and also brought a jar of her home-made jam and pre-mixed caesars. We got right into those caesars. 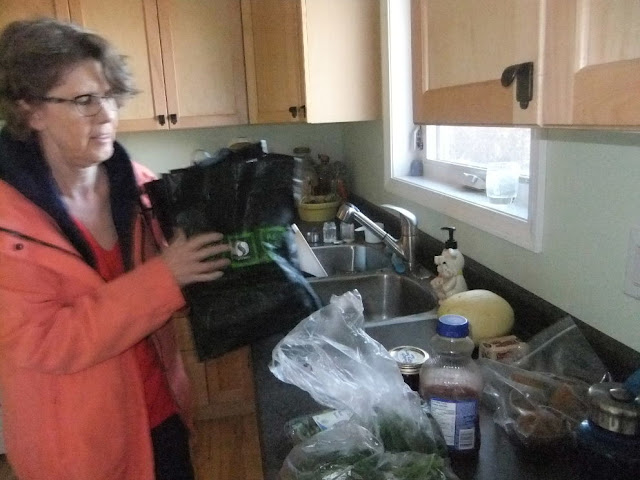 I made her work for her supper. The wild rice salad was already chilling in the fridge, and it was tasty and a nice change from the usual. I'll post the recipe at Stubblejumpers Café one of these days. Another part of my supper plan was stewed chicken with cinnamon. I've made it before and it was delicious, but I must've thrown the chicken whole into the stewing pot. This time I decided to follow the recipe more closely by cutting the chicken into pieces and removing the skin before stewing it. I knew, however, that I don't know the proper (if there is one) way to cut up a chicken. Cathy thought she did, as she'd watched her mother do it many times while growing up on the farm at Wilcox. So while I busied myself with other kitchen errands, Cathy attacked the chicken. The stew turned out beautifully and I'll post that recipe too. One of these days.

Cathy's just driven out of the yard and I'm on my way to town in a few minutes to pick up Emil from Everett's after his three-day weekend and ferry him over to his own place, which is too far for him to walk. It's not that he can't walk that far, it's that it takes him forever and he's exhausted afterward.

It's a gorgeous fall day, sunny but requiring a windbreaker, something warm beneath it, a scarf, and ear coverings if you're striking out to walk on my road. It rained during the night so Scott's harvest has halted again. On Thursday afternoon headed into town I met a convoy of eight combines on the road, on their way to do custom work for a local farmer.

The SODA CRACKERS recipe has been posted at Stubblejumpers Café.
Posted by Blondi Blathers at 3:42 PM No comments: