Through the Office Window 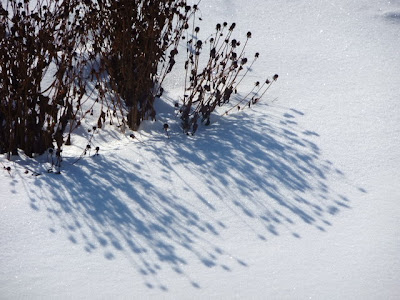 5pm
The dog is barking right behind the house and I hop up on the single bed behind my desk to look out the window, letting my eyes follow in the direction Jenna's nose is pointing. The most beautiful coyote is standing in the trees next to my flower garden, and I, thrilled, turn away to reach for the camera. By the time I'm back at the window, only seconds later, Jenna Doodle has entered the bush after the coyote, and instead of running it comes after her! Only my voice hollering through the hurriedly opened window — "You get out of here! GIT!" — scares it off, and it trots through the trees, toward the road, and is out of sight. Jenna is still barking 15 minutes later, pissed off at the coyote's audacity, though the intruder is no longer visible to me.
Ooh the excitement!
Obviously when she's barking, there's a good reason, though we don't always get to see what it is. It happens every night; I guess the coyotes are here, hoping to catch one of our cats hunting in trees around the yard. We haven't seen the mother cat for a few weeks now, nor a particular one of her kittens in recent days even though they usually stick close to the safety of the tractor shed. Darn it. And heaven forbid a fox or coyote nabs Ducky Doodle if he runs out to the road at night, let out to do his before-bed business, thinking he's a fierce big fella. Guess I'll have to slip into my boots and go out at the same time; if I wait on the step, he's unlikely to go far.
Posted by Blondi Blathers at 12:34 PM 1 comment: