When Cathy met me in Regina last week, she came bearing gifts.
One of them was a notebook made entirely from recycled material. 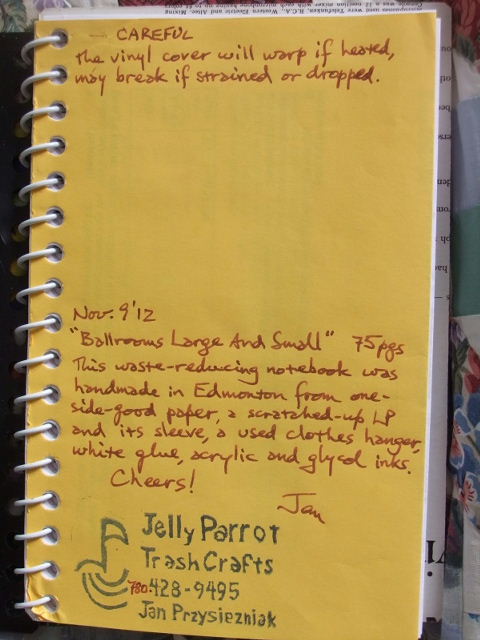 Emil and I have just returned from town, where I did the bulk of my Christmas shopping in less than an hour. The drugstore was busy and one of its tills was out of order, so there was a lineup at the checkout. It's nearly 30-below today, so I was comfortable in the street but indoors got a little sweaty, standing there with half a dozen boxes of chocolates and a T-shirt in my arms. Those are Emil's gifts; he had no Christmas list, but advised that he wouldn't mind some chocolates.

Across the street at the dress store, I was the only customer and it took all of 5 minutes to pick out Scott's presents. The clerk wrapped 'em up all pretty, so I won't have much to do tonight.

I have not hauled from the china cabinet my tiny but beautiful origami Christmas tree yet. I have not strung one light onto a houseplant. I have done no seasonal baking. I haven't sent a card. Nothin. I'm not even planning to take the entire day off, tomorrow.

And fortunately for you, dear friends, I am not looking for more video performances of Beautiful Star of Bethlehem. It seems the spell has been broken.

I did get a treat this morning when, after he'd done his work in the basement, our electrician joined us for coffee. Leonard and I were in the same grade at school in our home town, Margo, so I was happy to have a chance to sit and visit a bit with him. Emil and I went to Karen's yesterday for a delicious potluck dinner and spent the afternoon with her family and our uncle Neil and his family, so there were lots of grandchildren about and one incessant fire siren on a brand-new riding toy. The food and fine company were worth it, though. We don't see our cousins nearly often enough. Family gatherings have changed a lot since we were all kids.

Poor old Scottie fed and watered cattle and then worked in the basement and perhaps at his aunt's as well. He's preparing to hook the new well up to the house and so on ... there is no rest for the wicked, as the saying goes. Or is that for the weary? Well, he's both, so I'm still right. Right?
Posted by Blondi Blathers at 2:42 PM 4 comments: