God Always Gets Ya 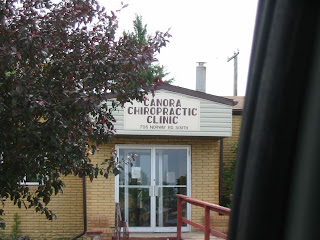 Had to make a run to the chiropractor this morning for Scott's back.

I always tell him, when he has pain of any sort, that God is getting him for something or other he's done wrong. It's BS of course, but I say it anyway.

All the poor lad did this time was push a lawnmower whose handle was about a foot shorter than it should have been for someone his height. He's paying, bigtime. Suffering considerably. Wailing, gnashing his teeth, whining. You know what men are like when they don't feel well.

I'm joking (well, sorta). I feel sorry for him. Back pain is something that keeps you from getting comfortable, even to sleep. My personal experiences of it have been rare and long ago, but I remember them well. It wasn't pretty.

In the van, I listened to a talking book (The Lie) in front of the building for an hour-and-a-half before walking to a yard three blocks away where a gentleman, presumably retired, builds and sells willow lawn furniture, flower planters, birdhouses, etc. Will have to have a second look next week, when I drive Scott for another appointment if he still needs it.

We stopped in Margo for lunch on the way home, as there'd been a voice message that brother Buttski would be travelling through from Edmonton. But we missed him; he'd been and gone, apparently with Bruce and Shirley. (That's my uncle and aunt, for those of you who aren't from home. I nicknamed my brother Cameroni Bumboni and taught my kids to call him Uncle Bum. Which he claims to hate, particularly in crowded restaurants where single women might be within earshot.)

And now, since my morning and half the afternoon's been spent roaring down the highway, I had best go earn some moolah.
Posted by Blondi Blathers at 1:54 PM 1 comment: