Holiday for You, Maybe 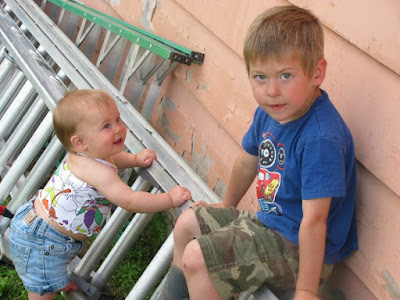 Apparently I am three thousand years old, for I have been a great-aunt for four years already.

These two are my sister Karen's grandchildren.

Shelly bolted out the door without either breakfast or coffee at six o'clock this morning. Several hours later the sky opened up and dropped an inch-and-a-half of rain on us in a heavy downpour. Once again, I had to unplug my computer to be on the safe side. Thus, now that the sky's blue again, I need to get back to work. No such thing as a long weekend for Moi.

Karen came out for supper last night and at Shelly's request brought her guitar. We cooked dead animals over the firepit for supper and then had a singsong. I tried to get a photo of Shelly's gigantic grin as Karen sang and played, but naturally the battery on my camera had to go and quit just then. Hmph.
Posted by Blondi Blathers at 6:11 PM 7 comments: