A Night Out In Wa-Town 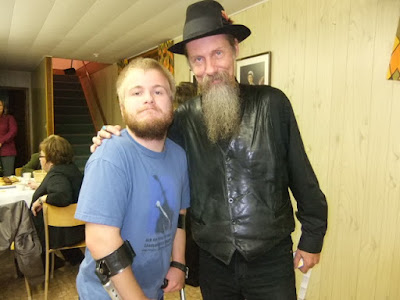 Emil with Doc during the intermission, when we all lumbered down to the church basement for cookies and coffee.

I thought I'd try out my camera's videomaking capabilities, and managed a not-too-bad recording of Mr MacLean onstage, though the lighting wasn't very good. It is presently being uploaded to Youtube but I'll add it here later for your listening pleasure, blues lovers.

Emil says he just might let his beard grow as long as Doc's.

Reply to Comments
What happened to my favourite beach? In 2007 Fishing Lake flooded due to heavier-than-usual rainfall and inadequate drainage. If you're in Canada, you saw it on the national news quite a bit that spring. Homeowners along the shoreline are still dealing with waves, on windy days, breaking up their boat launches and smashing against their back steps. It was a real mess and it still is.
Posted by Blondi Blathers at 11:16 AM 1 comment: