Not too hot, not too cold. I lack only a friend to sip with. And a patio. 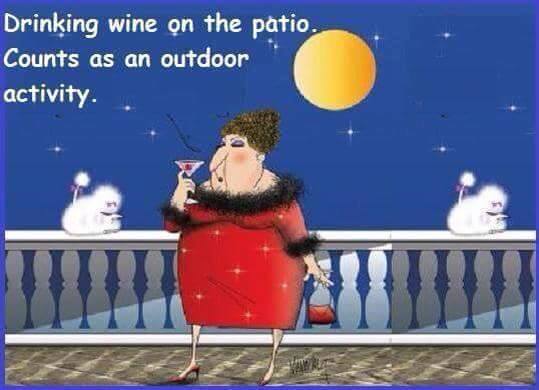 It's 7 o'clock and my mate is still out working somewhere (so that I can enjoy this luxurious lifestyle, he'd be sure to say). It's just me, the dogs, the cattle and the wine.

I didn't wait supper though. I've had steamed potatoes and broccoli, and marinated sirloin tip steak. The kitchen's smoky; I'm frying a second helping of steak.

A bike ride might be beckoning. I haven't seen the baby teals today; they were nowhere in sight when I walked north, earlier.
Posted by Blondi Blathers at 7:11 PM 5 comments:

Emil was drying and I was washing dishes when through the window I saw Jenna Doodle take her wagging tail toward the driveway. She lay down on the grass instead of meeting the new arrival, so I knew it wasn't Scott.

When we spotted Rose come walking under the maple tree, we were both excited. A surprise visit from Uncle Neil and his lovelier half! Emil had just been wishing aloud that he could arrange a visit with Neil and was going to phone him.

The coffee pot went on and we jibbered and jabbered for an hour and Rose and I looked at the flowers and then it was time to go.

She went home with half a dozen oriental poppies, and later I dropped off the same number — delphiniums this time — at Rita's.

Next: Emil gets his chicken dinner.
Then the double-layer cake; the two of them knocked off half of it at first sit-down.