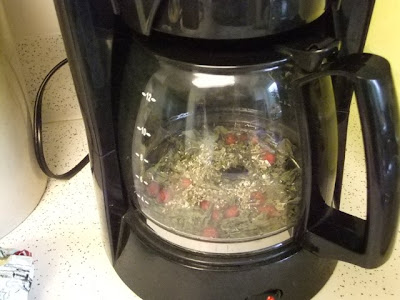 Was that a sniffle?
You need a cup of medicinal tea.
Come on over here and I'll brew some up.
This is wild yarrow and dried rosehips gathered in the fall, and spearmint from last summer's herb garden.
It'll fix you right up.

This year I've planted only two new herbs: lemon thyme, and lavender. The former will be used in the kitchen and the latter I'll make a scented oil with. Two or three drops in the bathtub are relaxingly fragrant and a couple drops on your pillow bring restful sleep.

My oregano did not come back from the roots but started new colonies in several places rather distant from the original plant. At least I hope it's oregano; we use a lot of it. Last year I just froze the leaves whole; works dandy.

I haven't been anywhere to replace the two basil plants that withered and died after several days of wicked cold wind several weeks ago. I'd like to buy a lemon verbena plant, too; a generous herb-growing man gave me one last year, introducing me to a lovely tea. I still have some of the dried leaf, which has been doled out carefully so that it will last. It's time to use it up; after a year, herbs start to lose their potency and flavour.

What there is plenty of is feverfew, a pretty plant with little white flowers for fighting migraines. It reseeds itself and, grimacing, I eat a fresh leaf every day during the season. I want to consume it year-round without putting it into capsules. Maybe I can disguise its sharp, acrid flavour if I put a pinch of it in with more pleasant-tasting herbs to make a tea— not too much though. The first and only time I tried that, I threw the tea out.

I’ve told Everett he has to work in the yard (i.e. do my bidding; as if he doesn't have to do that all the time, he'd say; poor laddie) one hour every day after school, and he doesn’t mind that; there is less kvetching about it, anyway— limiting the period of enslavement seems to put his mind at ease. And you know, the kid moves like a lumbering ox but he gets quite a bit done in that hour. Right now we are laying landscape fabric and wood mulch on the pathways through my flower garden. He's a godsend because, although I can swing those heavy bags around, they're bulky and awkward and my back and neck complain the next day and I wonder why I, a middle-aged lady (gak!) am doing this when I have a boy Strong-Like-Bull living right here in my house.

Do you love documentary films? If so, here's a link for you.
Posted by Blondi Blathers at 11:13 PM 4 comments: