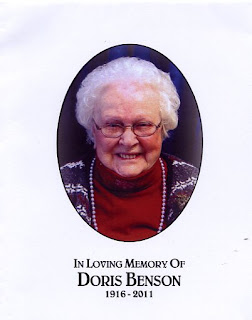 It's been a busy week, between Grandma's last days, those that followed, and a couple of extra projects I signed up to help with at work. Then I had the good fortune to catch Emil's cold, so haven't had one ounce of extra energy in the past two or three days.

If you were at the funeral yesterday, you've already read Grandma's obituary, written by me and read at the church by my sister Joan. She could be a public speaker; who knew! She did a great job of it. And my sister Karen played her guitar and sang this song at the service. She did ask me to sing with her, as she often does, but I don't like all eyes on me, let's face it, and was glad it was her and not me up there. Just as well, too, because my voice isn't in tiptop shape with this cold anyway. Afterward our cousin's little girl said to Karen, who has been singing around the countryside since she was in her teens, "You should be a singer someday!"

We had a fine day for the funeral, with a bite in the air but sunshine to keep it pleasant, and afterward met at the community hall for a lunch of sandwiches and squares whipped up by the church ladies.

In a two-story farmhouse three miles east of Margo, Doris May was born to May and John Bartley on Dec.7, 1916. They had a family of four daughters and five sons and, although two children wouldn’t survive their early years, the household was a happy one, with music and friends and plenty of community activity as well as the hard work of farm living in those days. One of Doris’s earliest jobs, when she was about four, was to sit at the bottom of the stairs to alert her mother in case her grandfather, who was ill, should need help to come down from his bedroom on the second floor.

Doris, the youngest of the sisters, was also the tiniest; when she started Grade 1 at Olivet School, she could still walk under the kitchen table. She was small but such a swift runner that she won all the races at school and collected the prize “hankies” till they gave up awarding them. Those trusty legs served her well throughout her life. She loved to dance and many people remember her performing the Highland fling at community functions around the countryside till well into middle age and beyond; her minuscule feet flew so fast they were a blur. Right up until her late eighties when she moved to Weneeda Park Lodge in Wadena, she walked everywhere she went in the town of Margo, and at a pretty good clip too.

Doris married Emil Benson in 1939 and they moved out to a farm north of Margo, where they raised a family of four. She busied herself with a wide variety of pastimes aside from keeping the house highly organized—everything in its place—and the children spic and span. She liked to play cards but was particularly fond of whist; she played bingo and took home more than her fair share of small prizes. After she and Emil built a house in town in 1967 she never missed a Sunday service at the Lutheran church and her high voice was unmistakable throughout the singing of all the hymns; she crocheted afghans and doilies; she was a member of the Margo Homemakers Club and the Lutheran Ladies Aid, and as a senior citizen was actively involved in the Silver Threads Club. She was a fan of hockey, curling and baseball (the Blue Jays were her team) and enjoyed watching games whether they were played in town or on TV.

A few things her family will remember: she collected pitchers for her china cabinet, took great care with her clothing and kept her hair “set,” and made hot lunches throughout the school year for the grandchildren, who were completely at home in Grandma and Grandpa’s house. Her skill with a box of Kraft Dinner (what kid doesn’t love KD?) was particularly notable, and her delicious fried potatoes seem impossible to replicate. She took pride in the accomplishments of all the town’s schoolchildren; she always attended their games and plays and was upset when the school was closed down. Dinners and suppers were never complete until the freshly brewed pot of tea had been emptied; the table was neatly set with either a tablecloth or placemats for every meal, and dishes were washed and put away promptly afterward. She took up search-a-word puzzles in her later years and did them every day till she was in her nineties, usually while watching game shows on TV. For the pure pleasure of it, she would occasionally sort through all the clothes in her closet and the jewellery in the box on her dresser. Although she didn’t get behind the wheel herself, she liked to go for a drive with Emil on a Sunday afternoon and remark on the progress of the crops or harvest, or the amount of snow in the fields, and appreciated this sort of outing right up to the fall of 2010. And let’s not forget how she doted on Blackie the cat, the faithful companion of her years in Margo after Emil passed away. The noisy beast even had his own spot on the kitchen table so he could look out the dining room window; there was only one person he really trusted, and that was Doris.

In 2006 Doris became a resident of Weneeda Park Lodge and was happy and busy there among new friends as well as old friends from Margo. In the winter of 2009 she moved to Kelvindell Lodge in Kelvington, where she was affectionately and well looked after and remained content until she passed away in her sleep on April 14, 2011, one week after suffering a severe stroke.

Our mom, our dapper little grandma, lived her life with determined resignation to its hardships and a firm yet quiet faith that we do indeed go somewhere else after we die.

“Thou lovest these souls that we love
With a love as far surpassing our own
As the glory of noon surpasses the gleam of a candle.
Therefore will we be still, and trust in thee.”
Posted by Blondi Blathers at 9:55 AM 8 comments: