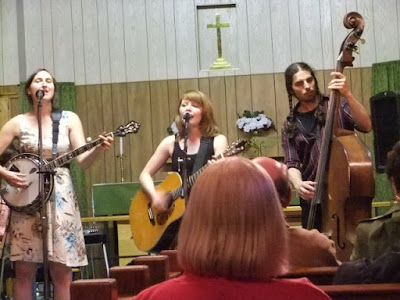 Don is a mover and shaker in the local arts community and has been actively promoting Wadena as a host for house concerts. Heard of them? Performers come out and give a concert in your home; you invite your friends and ask them for a donation, which goes to the performer; you give the performer a meal and a bed for the night. In return you get a couple hours of live entertainment without having to drive too far (we do a lot of driving to the city, from out here, for medical appointments with specialists and to buy things we can't get in our retail establishments, and for concerts by big-name musicians, so every chance we have Not to do that is appreciated). The performer, often on tour, gets to add a small gig between scheduled ones at larger venues, meet some new people, get a home-cooked meal, grow his fan base, and put a few dollars in his pocket.

I'm a member of the Shadow House Concerts group out here, but Don does all the organizing, all the work, all the promotion -- well, everything. Thanks, Don. All I am is a cheerleader, basically. I haven't even hosted a concert yet. Been telling Don that once we got into the new house ... but now that we're here, with a living room that only seats six, big heavy furniture that's a pain in the ass to move and is squeezed into the room as it is, and water problems (among others), I still don't feel very hostessy. Actually, not in the least.

Apparently I'm not alone in being slow to invite people into my house, because there aren't too many others stepping up to host a house concert, either. Fortunately Don is a member of the Anglican church (God's house, I guess, if you're a believer) in town, and that's where the house concert on Saturday night was held. It's a great little space: only holds about 50 in its pews, but has super acoustics because the walls and ceiling are all wood, except for the "stage" part where the clergyperson does his shtick.

The band, Heartstrings, came out from Saskatoon. One of the lead singers is the daughter of a gal I knew in high school (Shirley Nygren; some of you might be familiar with the name) and when she introduced the bass player, I recognized the last name right away and thought "He's gotta be a relative of Julie's! As a matter of fact, I seem to recall her saying she had a nephew who ...." And that was the case, as I found out after the show when I went up to talk to him about it.

For you former Katimavik readers, I'm talking about the Julie who was our group leader when we were in Kedgwick, New Brunswick. And Julie, now you know -- I did meet your nephew and had a nice little chat with him before we left.

No doubt something will come up between then and now, but the next "house concert" we have lined up is Doc MacLean on Oct 13th and it looks like he'll be performing in the church yet again (he was here with Big Dave McLean last fall). You can have a listen to some of the songs on Doc's recent CD, Narrow House, by clicking here and then clicking on the "Audio" link on the webpage. I am not sure what Doc calls his unique style of music (Delta blues? You'll have to edumacate me, Doc) but this CD has been in regular rotation on my player since he was here.
Posted by Blondi Blathers at 9:02 AM 5 comments: