Beasts I Have Seen


Usually they don't get far. They complain as they begin to lag behind, then give up, wait in the tall grass of the ditch until my return, and accompany me back into the yard as if they've been along the whole way. Alice, the orange one on the right, has turned out to be a male; he's now Alice Cooper.

Back when I first started reading online journals, now called blogs, there was a gal who rode her bicycle to work. She called herself Firedrake or somesuch, and her entries always included a listing of the roadkill she'd seen on the highway. I wonder where that woman ended up, if she's still blogging somewhere, whether she still bikes and keeps track of the carnage along the way.

I have spared you any snapshots of the roadkill I pass on my walks. Right now there's a dead racoon that the magpies and other wildlife have only recently discovered; for the first week or two it lay there stinking to high heaven and I wondered why it remained untouched. I couldn't walk there with the dogs, for the stench. After the smell went away, we did stroll past the body and Buck Duckster III, a.k.a. Ducky the Incorrigible Deerfaced Chihuahua, immediately made as if to roll on it. I called him off and he listened, but having turned back and walked past it a few minutes later, I didn't think to keep an eye on the brat until I heard a strange squeaking and sure enough Ducky was having a heyday on the dead creature, and I guess his weight was forcing air out of it or something. You can imagine how much we enjoyed having the Duckster on our laps that night.

Also dead on the road is a little gopher, face-up. I can't figure out what is taking the scavenger animals and birds so long to find these bodies. There were also a lot of dead garter snakes during the hot weeks of late summer, run over by vehicles. Maybe they come out onto the gravel road because it helps them shed their skins? I found a complete snake skin one day, from head to toe, or end, or whatever.

And then come September these little brown and black caterpillars appeared all over the road. I'm constantly sidestepping them. 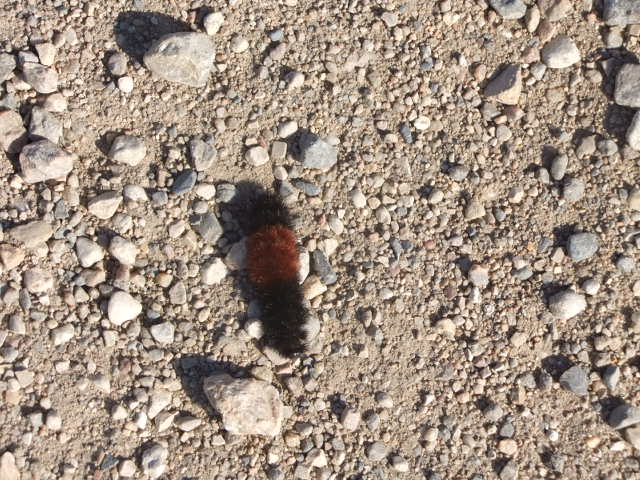 A little internet research indicates that they are woolly bear caterpillars, out looking for a good place to hibernate. See here for more information.
Posted by Blondi Blathers at 5:43 PM 5 comments: