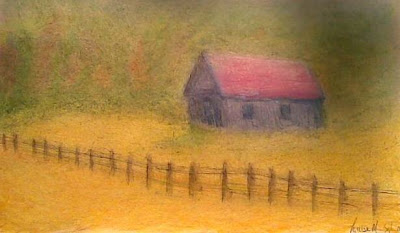 This building is not far from Louise's cabin in Quebec, where she goes to put her feet up and relax every chance she gets.

She's planning to do a painting using my photo of Scott out checking the cattle, which was posted here this summer. I'll put it up here, too, if she lets me.

Back in 1978, when we were in our late teens, Louise and I were participants of a volunteer youth group sponsored by the federal government . You've heard me mention Katimavik before. As a group of 30 kids we spent nine months living in three different Canadian provinces, working in small communities. I don't recall actually doing very much work, mind you, but we forged some pretty strong bonds of affection and a good number of us are still in touch.

A few months ago Scott came home from one of his customer's homes and told me the fellow had heard that a long time ago I was a member of a group that used to hand out flowers at the airport. Hee!! I had a good giggle when I realized he must have been thinking of Katimavik, because at the time, people who'd never heard of it before were convinced it was some evil cult out to steal their children.
Posted by Blondi Blathers at 9:27 PM 1 comment: