Saudi Arabia in My Kitchen 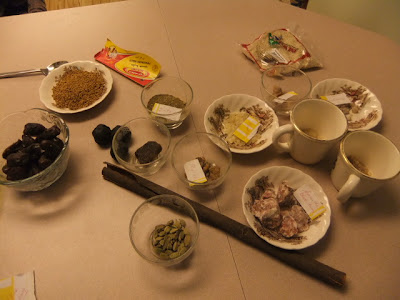 A hometown gal (some of you will remember Bev Ziola) has been living in Saudi and is in Canada this month to visit with her family. She was out here the other day to pick up some belongings we'd stored for her, and she came bearing gifts. I scrambled to find small containers to sort them into until later, when I put them into small plastic bags.

Among other things, there's a cinnamon stick, fenugreek, cardamom, dates, dried lemons, black cumin and a variety of incense in its natural state, including frankincense and myrhh. One of the incense rocks is called Scare the Ghosts Away. The kitchen smelled divine.

My Remembrance Day observance yesterday consisted of watching We Will Remember Them, a documentary shown on CBC that profiled a number of Canadian soldiers killed in Afghanistan, as remembered by their families, friends and comrades in arms. It was very sad, of course; one mother echoed my own discovery about grief when she said that people expect sorrow to become less over time, but that in fact it does not. According to those interviewed for the film, their soldier sons, daughters, fathers, husbands and friends were committed to their jobs and believed strongly that what they were doing over there was worthwhile and that somebody has to step up to the plate to help the Afghani people, so why shouldn't it be Canada and the Canadian armed forces?


I was on the living room floor a few minutes ago, doing the Tibetan Rites, when Everett said there was an unusual woodpecker at the feeders. I assumed it was the downy or the hairy, which are regulars, and that he simply hadn't noticed them before. But I got up to look and was surprised to see a pileated woodpecker. The thing was huge and I've never seen one here in the 10 years since I moved back.

How cool is that. I'd be tickled if it stuck around.

In response to my wondering why this blog was nominated for the Feminist award, I received this email today:


Hello Kate,
Mea Culpe!  I nominated you for both the Feminist Award with the Canadian Weblog Awards, and the Life award.
I nominated you for the Feminist award because I feel true feminism is lived first, expressed as political strategy and dogma only as necessary.  Seems to me most "feminists" have it the wrong way round, and you have it the right way round.
Anyway, best of luck with the Awards.
Maggie
http://www.maggieturner.net
Posted by Blondi Blathers at 4:45 PM 5 comments: