She Was a Soldier of Sorts 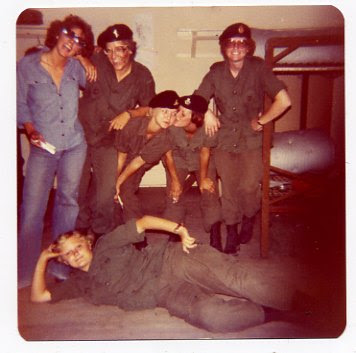 The summer of 1976 (at least, that's what's scribbled on the back of this photo) was when I wanted to make some money, and signed up for basic military training with the reserve forces out at Dundurn, Saskatchewan, for the two months between Grade 10 and Grade 11.
That whole summer was a shock to my system. I wasn't athletic, nor an early riser, and would have been hard-pressed to take orders from anyone.
Imagine me, then, called to awaken at 5 a. m., go straight out of the barracks to do jumping jacks, and then jog down the road for a mile before coming back to shower with the ladies, make the bed on my bunk so a coin bounced off the rough wool blanket, and head out for breakfast.
Then there'd be a day of classes in all sorts of things, like weaponry and marching and military law. And lots of "doubling" around the base carrying a rifle across my chest, at the front of a platoon that was all boys, except for me and Cindy.
That's Cindy giving me a smooch, up there. The other gals were privates, like ourselves, with whom we shared the women's barracks. I think there was only the one.
It's amazing we got out of bed at all, come to think of it, because every night we were in the mess hall, drinking and dancing till the wee hours.

Anyhow, Cindy phoned me last night. We haven't seen each other more than once in the past many years, but we had a lovely talk.
Posted by Blondi Blathers at 4:13 PM 2 comments: