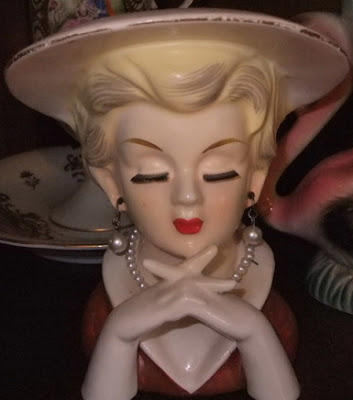 This ladyhead vase belonged to Aunt Jean, who would be 95 or 96 if she was still living.

I have other treasures to remind me of Aunt Jean, too. I'll show them to you as time permits. Grandma, her youngest sister, remains the last of Aunt Jean's immediate family alive today.

Aunt Jean followed Mom to wherever it is we go when we die, just months after Mom's death in 2005, but not before leaving me her photo albums and a scrapbook made by my great-grandmother, who collected songs, poems and stories published in newspapers of her day, cut out graphics from greeting cards (I assume that's where she got them), and glued them into a scrapbook with wooden front and back covers. It appears that I come honestly by my propensity to save paper and graphics of all sorts and to collage with them or paste them into journals and onto book covers, or just tuck them between the pages of my handwritten notebooks.

I've been reading the Jane Austen mystery series, written by Stephanie Barron. She's written fictional whodunits starring Jane Austen as the sleuth, using facts from Austen's history and times. They are a pleasure to read, particularly since Austen died young and a good many of her personal papers were destroyed by a trusted sister after her death. These mysteries, written in the first person, allow the reader to imagine a deeper look into Austen's personal life, though they are only stories of Barron's wild imagining. Mostly I enjoy them because I love the English manners of Austen's social class: the sophistication with which the characters structure their conversations, and the conventions and niceties that were such a part of how they lived. Must be some of Grandma's English ancestry bleeding through or something.

In the books there are numerous footnotes explaining words and phrases that were in common usage in the early 19th century, but there are also words that I have to look up in my Canadian Oxford Dictionary. For instance, a rest or a certain treatment might "dispel a fit of the megrims" -- megrim being a migraine, or a whim or fancy, or depression and low spirits. Someone might be told "Don't preach fustian," fustian meaning turgid speech or writing; bombast.

Never hurts to learn something new every day. Eh? When I read the characters' words, I realize how paltry my own vocabulary is.

Tomorrow I'm off to spend the weekend with some women friends. There will be fire, food, song and lots of laughing.
Posted by Blondi Blathers at 4:44 PM 4 comments: